On a year-over-year basis, consolidated capacity (measured in available seat kilometers or ASKs) increased 9.5% to 4.9 billion, primarily on 53.4% expansion in international capacity. Moreover, the carrier witnessed a 17.6% increase in consolidated passenger count in August driven by a 57.8% uptick on the international front.

Consolidated load factor (percentage of seats filled by passengers) improved to 82.3% from 77% a year ago as traffic growth exceeded capacity expansion. On a consolidated basis, departures and seats increased 9% and 9.3%, respectively.

In the first eight months of the year, consolidated RPK at GOL Linhas increased 9.5%, while ASK grew 5.8%. Also, the load factor for the period improved 280 basis points to 82.2%. While the company recorded a 1.5% rise in the volume of departures, the number of seats increased 4.1%.

Year to date, shares of GOL Linhas have outperformed its industry, courtesy of upbeat travel demand. The stock appreciated 14.6% compared with its industry’s 0.3% growth. 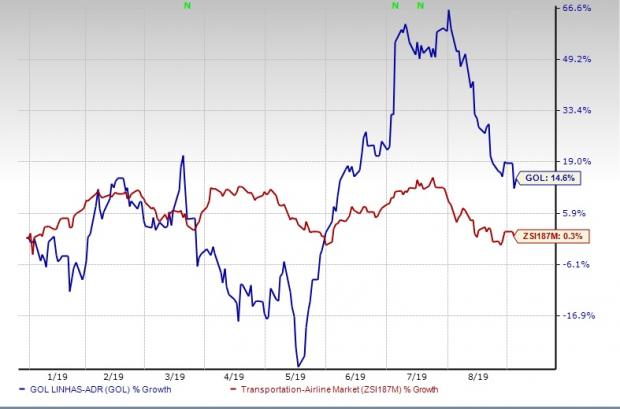 That’s twice as much as they spend on marijuana, legally or otherwise. Zacks special report revealing how investors can profit from this new opportunity. As more states legalize this activity, the industry could expand by as much as 15X. Zacks’ has just released a Special

Report revealing 5 top stocks to watch in this space