Valued at $20 million, the contract is scheduled to be closed by November 2020. Under the agreement, the company will ensure that the submarine is operating at full technical capacity as defined in the availability work package during the Chief of Naval Operations scheduled maintenance availability.

To counter the rising geopolitical tensions across the world, the U.S. government has been designing submarines for decades. In 1954, the U.S. Navy was the first to launch a nuclear-powered submarine. These submarines were better than the diesel-engine ones, which had to make multiple stops for refueling. Currently, the U.S. Navy has three classes of nuclear-powered attack submarines — Virginia-class, Ohio-class and Los Angeles-class.

Notably, in the United States, the market for the nuclear submarine is a consolidated one, operated by two prime players — Huntington and General Dynamics Corporation (GD). As a result, both the companies enjoy a large share of the market as well as high profit margins.

In this context, it is imperative to mention that the U.S. administration has been allotting significant provision for nuclear submarines in the nation’s defense budget, encouraging submarine-manufacturers like Huntington Ingalls to increase its production. Evidently, the fiscal 2020 budget has allocated $14.6 billion for submarines. Such solid budgetary allotments should usher in more contract flows for the company, like the latest one.

This reflects Huntington Ingalls’ significant role in the nuclear submarine market, enabling the company to win notable submarine-related contracts from the Pentagon. The latest contract win is a further testament to it.

Per a MarketWatch report, the global submarine market is expected to witness a CAGR of 5% by 2027. Considering this and the aforementioned developments, we can expect Huntington Ingalls to win more such submarine-related contracts, which in turn should boost its profit margin going ahead.

In a year’s time, shares of Huntington Ingalls have plunged 16.3% against the industry’s 6.6% growth. 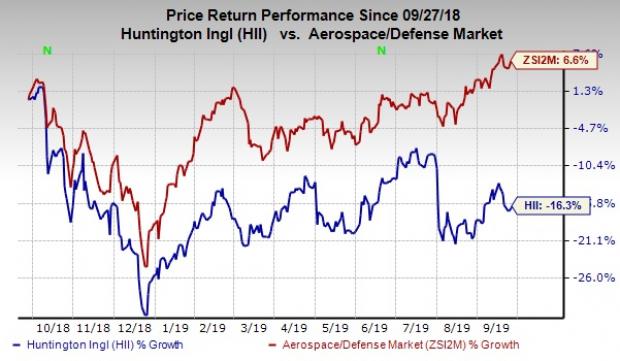