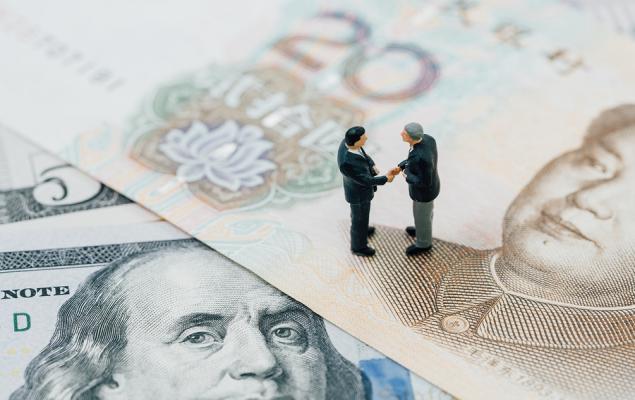 President Trump’s comments on the ongoing two-day meeting between high-level officials over trade have ignited hopes of a truce. The more than 15-month long trade tussle has seen tariffs on billions of dollars of goods, impeding global economic growth.

"We had a very, very good negotiation with China," said President Trump to the reporters after the talks were over for the first day of the meeting. He also threw light on his plans to meet the Chinese Vice Premier Liu He at the White House on Oct 11 (read: Chip ETFs in Focus as Trump Blacklists More Chinese Tech Firms).

Partial Trade Deal in the Cards?

A Bloomberg report pointed out that Chinese officials are ready to enter a partial trade deal with the United States. Beijing is ready to increase its purchases of U.S. agricultural products. In return, it expects the United States to call off the tariff hike of 5% on $250 billion of Chinese goods, which is supposed to go into effect on Oct 15.

Of late, there have been some moves made by both the sides toward a truce. China recently provided waivers to several state and private companies to purchase U.S. soybeans without facing retaliatory tariffs. Per a CNN article, the Trump government is prepared to soon approve license requests from the American suppliers for selling non-sensitive goods to the Chinese telecommunication giant, Huawei Technology Co (read: 4 Sector ETFs & Stocks to Bet on Ahead of Q3 Earnings).

Growth stocks are high in quality and are likely to witness revenue and earnings growth at a faster rate than the industry average. As such, growth funds tend to outperform during an uptrend. While there are plenty of options in the growth ETF world, we have highlighted five funds that offer broad-based exposure to the U.S. stock market like Vanguard Growth ETF VUG, Schwab U.S. Large-Cap Growth ETF (SCHG - Free Report) , iShares Core S&P U.S. Growth ETF IUSG, SPDR S&P 500 Growth ETF SPYG and Vanguard Mega Cap Growth ETF (MGK - Free Report) .

The easing of monetary policies by certain economies has bolstered confidence in investors and taken care of recessionary fears to some extent. However, some analysts believe that the speed at which ‘attacks and retaliations’ are taking place followed by the decision reversals in the trade-war game, it is increasing the uncertainty in global markets. Such periods of high volatility and ambiguity keep investors on edge while making it difficult for business houses to plan out a strong and concrete business strategy and capital expenditures. Therefore, a trade deal is much needed at this point of time.