Ameren Corporation (AEE - Free Report) recently announced that its board of directors has declared a cash dividend on its common stock of 49.5 cents per share, reflecting a 4.2% increase from the prior rate. Notably, the company hiked its dividend for the sixth consecutive year. Post issuance of the new rate, the annualized dividend will be $1.98. The hiked dividend is payable on Dec 31, 2019, to shareholders of record as of Dec 11.

In October 2018, Ameren’s management declared a 3.8% increase in quarterly cash dividend on its common stock of 47.5 cents per share, from the previous quarterly cash dividend of 45.75 cents, resulting in an annualized equivalent dividend rate of $1.90. During the second quarter of 2019, Ameren paid out dividends on common stock amounting to $233 million, reflecting a 4.5% year-over-year increase.

A stable financial position enables Ameren to maximize shareholders’ value through regular dividend payouts and share repurchases. As of Jun 30, the company’s cash and cash equivalents totaled approximately $6 million. In the first half of 2019, Ameren’s cash inflow from operating activities was around $879 million compared with $820 million generated in the first half of 2018.

Based on its financial strength, the company expects to maintain its long-term dividend payout ratio of 55-70% of its adjusted earnings per share for the next few years. We believe that the latest dividend hike is another step toward fulfilling the company’s long-run dividend outlook.

Looking ahead, Ameren’s systematic investments in growth projects, infrastructure upgrades, electric transmission and delivery infrastructure are improving service reliability and generating profits. Specifically, the company expects to spend up to $13.9 billion during 2019-2023, which should eventually benefit its profit margin. This, in turn, will likely help the company continue with its long-term dividend targets.

Importance of Dividend Hike in the Utilities Space

The Utilities sector is independent of fluctuations in the economy. Thus, stable earnings and cash flow enable utilities to reward shareholders with regular dividends and share buybacks. This positions them in investors’ good books.

Shares of the company have rallied 30% in the past year compared with the industry’s growth of 14.6%. 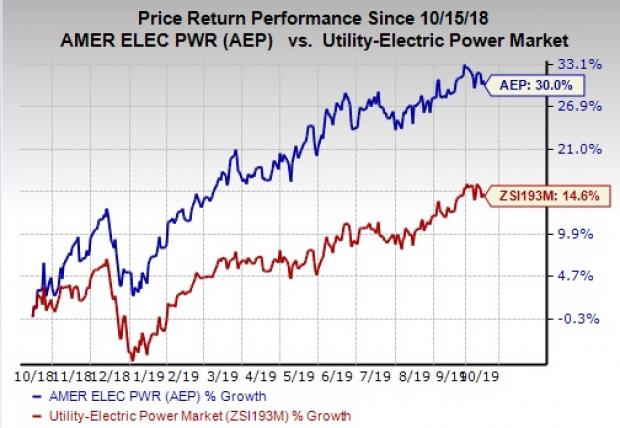 Zacks has just released Century of Biology: 7 Biotech Stocks to Buy Right Now to help investors profit from 7 stocks poised for outperformance. Our recent biotech recommendations have produced gains of +9%, +119% and +164% in as little as 1 month. The stocks in this report could perform even better.

BP's Q3 Output Takes a Blow, Divestments Ahead of Schedule