Barring one-time items, adjusted earnings per share (EPS) were $1.67, up from $1.45 in the prior-year quarter. The figure beat the Zacks Consensus Estimate of $1.61.

Net sales edged up around 0.2% year over year to $3,826 million in the reported quarter. However, the figure missed the Zacks Consensus Estimate of $3,896.7 million. Unfavorable currency swings affected net sales by around 2% while acquisition-related sales, net of divestitures, contributed more than 2% to sales growth and higher selling prices contributed 2.6%.

Industrial Coatings: Sales in the segment totaled $1.5 billion, down nearly 1% from the prior-year quarter’s figure. Increased selling prices of 2% and acquisition-related sales of around $80 million were offset by lower sales volumes of 6%. Also, unfavorable foreign currency translation lowered sales by nearly 2% on a year-over-year basis.

PPG Industries ended the quarter with cash and cash equivalents of $1.4 billion, up around 29.8% year over year. Long-term debt fell around 2.7% year over year to $4,885 million.

For 2019, the company expects adjusted EPS in the range of $6.17-$6.27. The projection includes fourth quarter year-over-year growth in constant currencies of around 15% at the mid-point. Moreover, the guidance represents adjusted EPS growth at the low-to-mid end of earlier announced 7-10% range, excluding currency translation impacts.

Shares of PPG Industries have gained 21.3% in the past year against 31.6% decline of the industry. 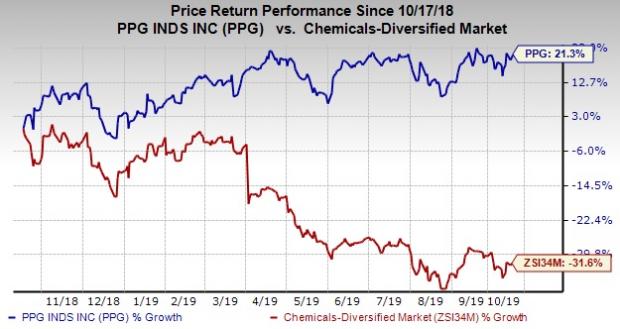 Agnico Eagle has an estimated earnings growth rate of 158.6% for the current year. Its shares have moved up 42.2% in the past year.