Adjusted earnings were 59 cents per share for the quarter, which surpassed the Zacks Consensus Estimate of 56 cents.

Net sales fell around 14.6% year over year to $1,390 million, hurt by lower volume in the company’s Titanium Technologies unit, and reduced volume and prices in the Fluoroproducts unit. Revenues lagged the Zacks Consensus Estimate of $1,393 million.

Revenues in the Fluoroproducts segment fell 6.8% year over year to $636 million in the reported quarter. The favorable impact of the adoption of Opteon refrigerants was more than offset by illegal imports of HFC refrigerants into the European Union and weaker demand for base refrigerants.

Revenues in the Chemical Solutions unit were $140 million, down 9.7% year over year. The company saw lower prices in the quarter mainly on account of mix and lower cost pass-throughs in Performance Chemicals and Intermediates.

Revenues in the Titanium Technologies division were $614 million, down around 22.4% from the prior-year quarter. The decline is attributable to lower volume of Ti-Pure TiO2.

Cash flows provided by operating activities were $288 million for the third quarter of 2019, down 15.8% year over year.

The company expects to witness weaker economic activity, moving ahead. It anticipates initiatives such as application development work in Fluoroproducts and Ti-Pure Value Stabilization to strengthen its relationship with customers.

Chemours’ shares have lost around 36.7% year to date, underperforming roughly 17.1% decline recorded by its industry. 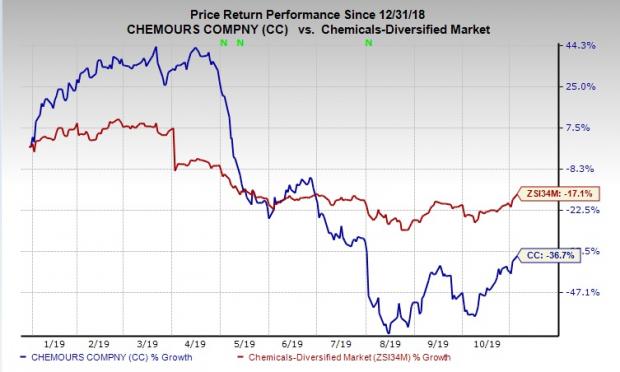