Newmont Goldcorp Corporation NEM reported net income from continuing operations of $2,226 million or $2.71 per share in third-quarter 2019, against net loss of $161 million or 31 cents in the year-ago quarter. The results were driven by gains from the formation of Nevada Gold Mines as well as higher realized gold prices and production.

Barring one-time items, adjusted earnings were 36 cents per share. However, the figure trailed the Zacks Consensus Estimate of 40 cents.

Newmont Goldcorp delivered revenues of $2,713 million, up around 57.2% year over year. However, the figure missed the Zacks Consensus Estimate of $3,016.9 million.

Attributable gold production in North America was 325,000 ounces, up roughly 296% year over year. Gold CAS for the region was $945 per ounce, up around 15% year over year.

The company ended the third quarter with $2.7 billion of consolidated cash. Net debt was around $4.8 billion, up from nearly $1.1 billion in the year-ago quarter.

Net cash from operating activities surged 86.1% year over year to $791 million in the quarter.

Newmont Goldcorp revised its outlook for 2019. The company now expects attributable gold production for 2019 to be 6.3 million ounces, down from 6.5 million ounces projected earlier.

Newmont Goldcorp’s shares have gained 20.3% in the past year compared with 57.8% surge of the industry. 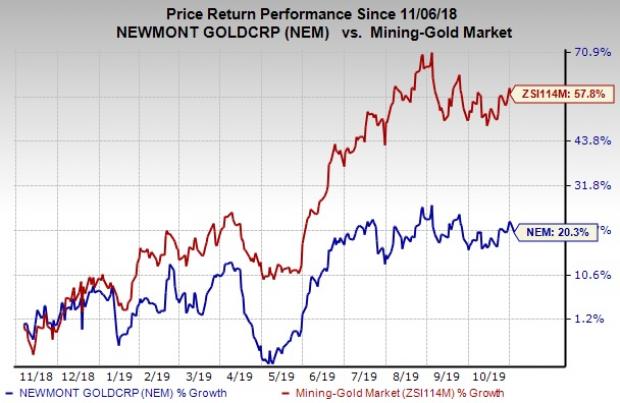