Innophos Holdings, Inc. logged a profit of around $6 million or 32 cents per share in third-quarter 2019, down around 54% from a profit of roughly $14 million or 71 cents a year ago. The bottom line in the year-ago quarter gained from a tax benefit of $6 million.

Barring one-time items, the company’s adjusted earnings were 45 cents per share in the quarter, down 24% year over year. It also missed the Zacks Consensus Estimate of 53 cents.

Revenues were $189 million for the reported quarter, down around 4% year over year, as higher pricing was offset by lower volumes due to the discontinuation of the low-margin nutrition trading business, softer demand and the indirect effects of tariffs. Sales, however, surpassed the Zacks Consensus Estimate of $185 million.

Revenues at the Food, Health and Nutrition (FHN) segment fell 9% year over year to $105 million in the reported quarter, as higher pricing was offset by reduced volumes due to discontinuation of the low-margin nutrition trading business and weaker demand.

The Industrial Specialties (IS) division recorded revenues of $73 million in the quarter, up 11% year over year. Increased acid sales and STPP (sodium tripolyphosphate) volumes into Latin America more than offset lower volumes due to indirect unfavorable impacts of tariffs on international sales.

Other sales dropped 32% year over year to $11 million on lower co-product and low-grade acid sales volumes.

Innophos ended the quarter with cash and cash equivalents of $30.7 million, a roughly 33% year over year increase. Long-term debt was $340 million, down 1% year over year. Free cash outflow for the reported quarter was $2 million.

Innophos, last month, entered into a definitive deal with an affiliate of One Rock Capital Partners, LLC (One Rock), under which, One Rock will acquire all of Innophos’ outstanding shares in a transaction valued at around $932 million. Due to the pending transaction, Innophos has withdrawn its earlier issued financial guidance for 2019.

Innophos’ shares have gained around 30.5% year to date against the roughly 14.6% decline recorded by its industry. 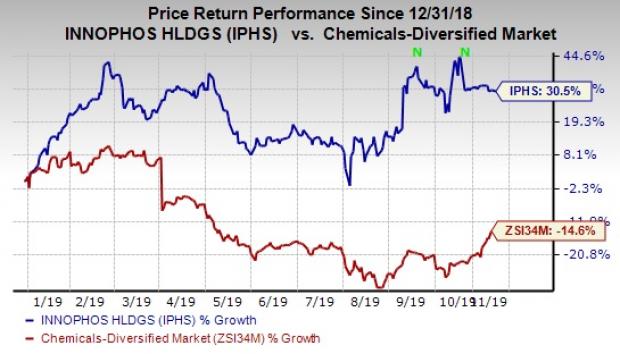 Agnico Eagle has a projected earnings growth rate of 168.6% for the current year. The company’s shares have rallied 72% in a year’s time.

Kirkland Lake Gold has projected earnings growth rate of 96.3% for the current year. The company’s shares have surged around 148% in a year’s time.

Franco-Nevada has estimated earnings growth rate of 39.3% for the current year. The company’s shares have shot up roughly 51% in a year’s time.