Canadian Solar is the developer of these three projects and per the agreement will supply the modules as well as manage the construction. KEPCO and Sprott will acquire Canadian Solar's remaining interest in the projects post initiation of commercial operation.

Once completed, these projects are expected to generate clean energy of 900 gigawatt hour (GWh) annually, which can power 206,000 households and lower 524,000 tons of carbon dioxide emission. Moreover, the generated electricity will be sold under 15-year power purchase agreements for energy and capacity.

Per a report of export.gov, from 2013 to 2018, the Mexican government undertook reformation of its power sector. The new administration has been developing priorities for 2019 through 2033. Currently, the López Obrador Administration’s targets 35% of Mexico’s electricity to be generated from clean energy sources by 2024.

Among all clean resources, solar energy is the most popular one owing to its easy availability and low panel prices. We believe that expertise in the solar market as well as recent investments by KEPCO and Sprott will further strengthen Canadian Solar’s footprint Mexico.

While Mexico solar market continues to be a viable option for expansion, the company has already widened its presence in the global market. Canadian Solar's geographically-diverse customer base is spread across key markets in the United States, China, Japan, the U.K. and Canada as well as emerging markets in Brazil, India, Mexico, Italy, Germany, South Africa and the Middle East. Of late, the company has further expanded its global late-stage project pipeline in Argentina, Australia, South Korea, etc.

Shares of Canadian Solar have increase 4.3% year to date compared with the industry’s growth of 51.5%. 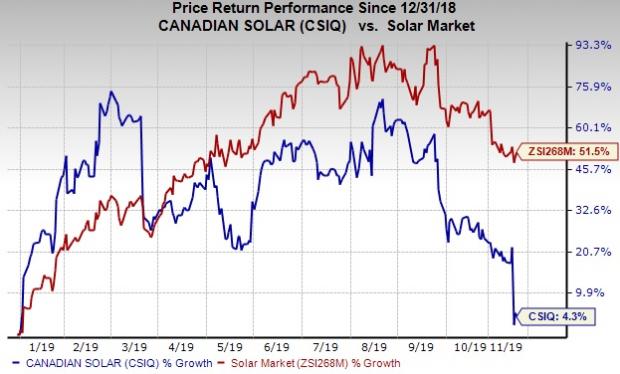 Anaplan (PLAN) to Report Q3 Earnings: What's in the Cards?