U.S. stocks have had an impressive rally so far in 2019. All three major stock indexes — the Dow, the S&P 500 and the Nasdaq Composite — are currently at striking distance from their all-time highs, which they achieved in the first half of November. However, volatility has gripped Wall Street since the past week owing to several conflicting news about the signing of an interim trade deal between the United States and China.

Meanwhile, despite stock market fluctuation on an almost regular basis, several stocks popped in the last seven trading sessions. Some of them carry a favorable Zacks Rank and have strong growth potential for the rest of this year.

Volatility is Back in Wall Street

In spite of a highly impressive rally so far in 2019, Wall Street was never completely free from market fluctuations. Volatility showed its ugly face in short spans several times this year. Lingering trade-related conflict with China, whih resulted in economic slowdown in both the United States and globally, yield curve inversion of government bonds, and geopolitical crisis in the U.K., Italy, Iran, Saudi Arabia and Venezuela also led to market fluctuations.

The latest downtrend started since the beginning of the past week, following news regarding uncertainty over the signing of a U.S.-China partial trade deal. On Nov 21, the Dow declined 0.2%, marking its third straight day of loss, its longest losing streak since August. The S&P 500 also recorded three consecutive days of losses for the first time since September. Meanwhile, the Nasdaq Composite finished in negative territory for two successive days.

On Nov 20, Reuters reported citing people close to the White House that completion of a “phase one” U.S.-China trade deal could be delayed till next year. The Wall Street Journal also reported that the Trump administration’s desire to sign a partial trade deal with China may not be fruitful this year citing former administration officials and others sources in the White House.

On Nov 21, The Wall Street Journal reported that Chinese Vice Premier Liu He invited U.S. Trade Representative Robert Lighthizer and Treasury Secretary Steven Mnuchin to Beijing for further negotiations. Notably, Liu He is the chief trade negotiator for China. However, it is not clear whether the U.S. government will accept this invitation.

Meanwhile, on Nov 19, Trump has threatened to hike the existing tariff rate to 30% from 25% on $250 billion Chinese goods and impose tariff of $160 billion on fresh Chinese goods if the trade deal is not signed by mid-December.

At this stage, we have narrowed down our search to five stocks that popped in the past seven trading sessions and still have strong growth potential. Our picks carry either a Zacks Rank #1 (Strong Buy) or 2 (Buy). You can see the complete list of today’s Zacks #1 Rank stocks here. 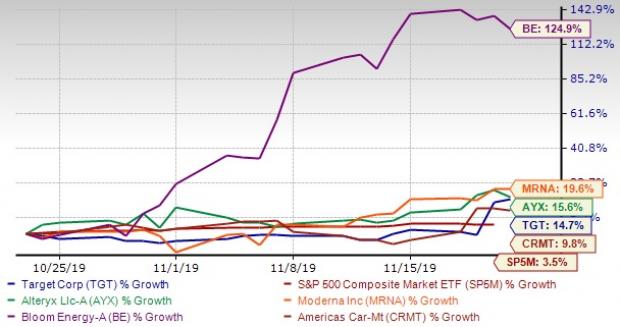 America's Car-Mart Inc. (CRMT - Free Report) operates automotive dealerships and is one of the largest automotive retailers in the United States focused exclusively on the Buy Here/Pay Here segment of the used car market.

Bloom Energy Corp. (BE - Free Report) generates and distributes renewable energy. It supplies electricity to the residential, commercial and industrial sectors. It offers a stationary power generation platform that converts standard low-pressure natural gas or biogas into electricity through an electrochemical process without combustion.