Shares of Intercept Pharmaceuticals (ICPT - Free Report) have gained 7.5% in the first eleven months of 2019 compared with the industry’s growth of 5.4%. 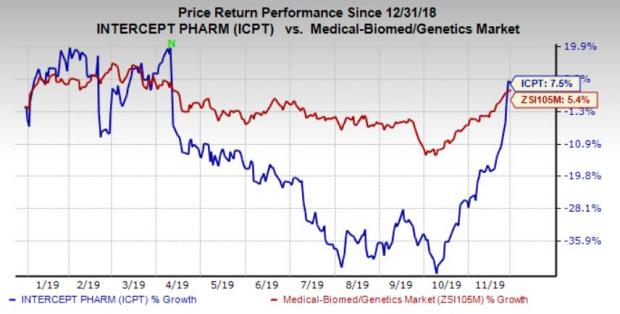 Notably, shares gained significantly after the company announced that the FDA accepted its New Drug Application (NDA) for obeticholic acid (OCA) seeking accelerated approval for the treatment of fibrosis due to NASH. The regulatory agency also granted Priority Review to the same. The agency assigned a Prescription Drug User Fee Act (PDUFA) target action date of Mar 26, 2020, to the NDA. The agency indicated to hold an advisory committee meeting to discuss the application. However, the date is yet to be finalized and the timeline for the review is subject to change.

A potential approval of OCA for NASH will significantly boost Intercept’s prospects, given the market opportunity in fibrosis due to NASH.

A chronic liver disease, NASH, is caused by excessive fat accumulation in the liver or steatosis. Per statistics, it affected up to 15 million people in the United States causing inflammation, hepatocellular injury, progressive fibrosis and cirrhosis. The ailment is anticipated to be the leading reason for liver transplantation by 2020.

With no treatments presently approved to address this disease, the market scope is substantially huge and the winner so far in the race seems to be Intercept.

OCA is already approved under the brand name Ocaliva for the treatment of primary biliary cholangitis (“PBC”) in adults with an inadequate response to UDCA or as monotherapy in adults who are intolerant to UDCA.  The uptake of the drug for the treatment of PBC in adults has been impressive, even though the safety and dosing issues for the same were earlier under the scanner. The company expanded its sales force to reach out to more physicians. Hence, sales have gained traction and are expected to pick up further.

While the lack of other candidates in the company’s pipeline is a concern, we are quite positive about the company’s progress to advance OCA in NASH as it is now the forerunner in the same space.

We remind investors that there have been quite a few setbacks in the NASH space this year. In June, Conatus Pharmaceuticals CNAT announced that top-line results from the ENCORE-LF clinical study of emricasan failed to meet its primary endpoint. Consequently, Conatus and partner Novartis NVS mutually agreed to cease the collaboration agreement for the global development and commercialization of the drug. Earlier, biotech bigwig Gilead Sciences, Inc. GILD too suffered a setback with the failure of a late-stage study on pipeline candidate, selonsertib, in patients with compensated cirrhosis (F4) due to NASH.