Repsol Targets Net Zero Emissions By 2050, A First Ever Move

Repsol, S.A. REPYY recently announced its non-binding plan of reducing net carbon emissions to zero by 2050. The move, which complies with the Paris Agreement climate goals, marks first such initiative in the oil and gas industry. The company intends to target carbon intensity of its products instead of reducing emissions directly.

The company is expected to use its 2016 carbon intensity level as the baseline. It plans to reduce 10% intensity by 2025, 20% in the next five years. It expects carbon intensity to fall 40% by 2040 and reach 100% by 2050. Notably, Repsol expects to achieve 70% of its reduction target through existing technologies. 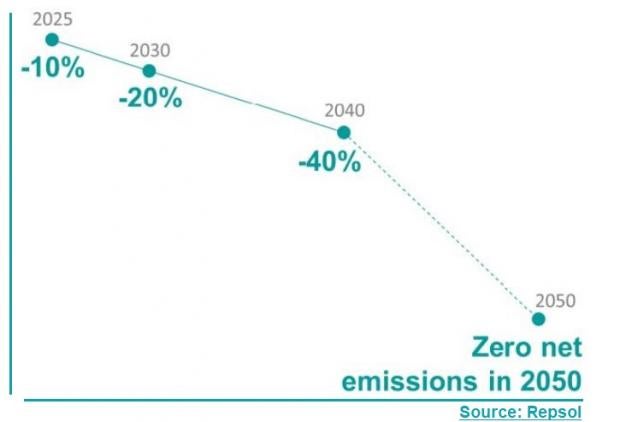 These emission reduction plans are way more appealing to investors, who are putting pressure on energy companies to reduce carbon footprint, than its peers’ initiatives. Other energy companies like Royal Dutch Shell plc RDS.A and BP plc BP also have their respective decarbonization efforts.

The company’s emission reduction plans incorporate capturing, storing and using carbon. Moreover, the Spanish energy giant can even opt for reforestation and other natural climate sinks to reach its target within the said time period. To attain its targets, the company has upwardly revised its low-emissions electricity generation capacity guidance to 7,500 megawatts (MW) by 2025 from previous plan of 4,500 MW. Currently, it has 2,952 MW capacity in operation and developing another 1,083 MW. Notably, the company has approval of investing in an additional 1,600 MW of capacity.

Due to the new targets set by the company, it is expected to incur post-tax impairment charge of almost €4.8 billion, which will lead to a decline in 2019 profit levels. However, the company’s yearly cash flow will likely remain unaffected. This will enable Repsol to remain in line with its plan of raising shareholder payments. Notably, in the first three quarters of 2019, the company’s operating cash flow increased 22% year over year. This will support its plan to reach shareholder remuneration of €1 per share. The increase in cash flows is also expected to trigger stock buybacks.

Madrid-based integrated energy company, Repsol, which advocates energy transition, has lost 2.8% in the past year compared with 4.2% collective decline of its industry.

Antero Midstream’s bottom line for the current quarter is expected to surge 120% year over year.