Dow Inc.’s (DOW - Free Report) shares are up 10.2% over the past three months. The material science company has also outperformed its industry’s rise of 1.2% to over the same time frame.

Dow, a Zacks Rank #3 (Hold) stock, has a market cap of roughly $39 billion and average volume of shares traded in the last three months was around 3.900.7K. 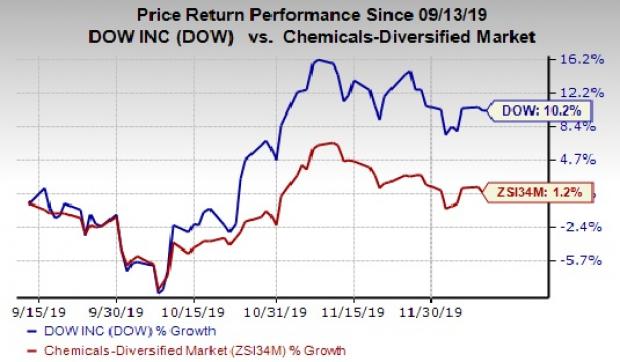 Forecast-topping earnings performance in the third quarter and upbeat prospects have contributed to the gain in Dow’s shares. Dow’s third-quarter earnings of 91 cents per share trounced the Zacks Consensus Estimate of 72 cents. The company gained from its actions to reduce costs in the quarter.

Estimates for Dow for 2019 have moved up over the past two months, reflecting analysts’ confidence on the stock. Over this period, the Zacks Consensus Estimate for 2019 has increased by 6.6%.

Moreover, Dow remains committed to invest in attractive areas through highly accretive projects. It is investing in several high-return growth projects including the expansion of downstream silicones capacity. The company has already completed 14 of the 18 downstream capacity expansion projects that it plans to execute this year.

Kirkland Lake Gold has projected earnings growth of 97.1% for the current year and sports a Zacks Rank #1 (Strong Buy). The company’s shares have surged around 69% in a year’s time. You can see the complete list of today’s Zacks #1 Rank stocks here.

Agnico Eagle has a projected earnings growth rate of 167.9% for the current year and carries a Zacks Rank #2 (Buy). The company’s shares have rallied roughly 52% in a year’s time.

Franco-Nevada has estimated earnings growth rate of 45.3% for the current year and carries a Zacks Rank #2. The company’s shares have shot up roughly 35% in a year’s time.