After a long period of uncertainty, telecom giants — T-Mobile US, Inc. (TMUS - Free Report) and Sprint Corporation — are currently facing a landmark trial from certain state attorney generals, aiming to prevent the $26.5 billion megamerger deal. Notably, this federal trial is the outcome of an alliance of 14 Democratic state attorneys general (AGs), who believe that the proposed deal will threaten competitive market in the U.S. wireless industry, affecting customers and escalating costs.

The telecom bigwigs, however, argue that such consolidation will rather emphasize strong broadband Internet access with the rollout of ultra-fast 5G mobile data to more than 90 million U.S. customers. They further believe that the proposed blockbuster deal will bring in healthy competition and create new cost-saving plan for customers, catapulting T-Mobile’s position to the second-largest U.S. carrier.

Per media reports, T-Mobile’s CEO stated that the new T-Mobile would refrain from increasing the prices of their plans post the closure of the deal, reinforcing cost-saving plans such as $15/month prepaid plan that includes 2 gigabytes of mobile data. However, U.S. District Judge, Victor Marrero, stated that such deal can only augment the prices of the cellphone plans, leaving customers with limited choices in the long run.

This July, T-Mobile and Sprint had received the Justice Department’s approval for the deal as DISH Network Corp. agreed to pay $5 billion for their wireless assets. Dish received a seven-year agreement to sell T-Mobile’s wireless service under its brand. The terms also include a three-year service agreement from T-Mobile to provide operational support as prepaid customers move to Dish.

However, the AGs are of the opinion that instead of demonstrating its ability to establish a nationwide wireless network, Dish is especially known for its history of accumulating FCC licenses. As a result, the satellite-TV provider will be liable to pay fines up to $2.2 billion if its 5G wireless network fails to cover at least 70% of the U.S. population by June 2023.

Given the major apprehension surrounding Dish’s history of amassing FCC licenses, it is likely that Charlie Ergen, cofounder and chairman of Dish Networks, will be questioned by the coalition of the AGs, whether it will be able to diversify and scale up its operations to compete in the long run by replacing Sprint as the fourth-largest carrier in the United States.

Despite T-Mobile’s success at winning votes from Texas, Mississippi and Colorado, state officials representing 40% of the U.S. population still oppose the deal. The opposition list includes AGs from Connecticut, Illinois, Massachusetts, Michigan, Oregon, Pennsylvania and Washington, DC, to name a few. The trial is expected to last two weeks and Sprint Chairman, Marcelo Claure, and T-Mobile CEO, John Legere, are all set to take their respective stance against the AGs. The trial, which is considered to be the concluding hurdle for the company, will ultimately decide the telecom bellwether’s fate to deploy faster and seamless 5G technology across the country, thereby benefiting the larger population.

Markedly, the combination of the two networks is expected to fill coverage gaps and provide more 5G connectivity, helping the company to devote more resources toward building new 5G infrastructure. According to media reports, the merged company would roll out 5G technology to 97% of Americans, including 85% of rural locales.

Nonetheless, the state litigators are concerned about competition in the greater telecom space, even as officials from each of the companies stated that the deal will keep a control on prices for three years. Jobs are another major area of focus as the deal will likely harm independent wireless dealers, leading to a substantial loss of retail jobs and lower pay for workers. 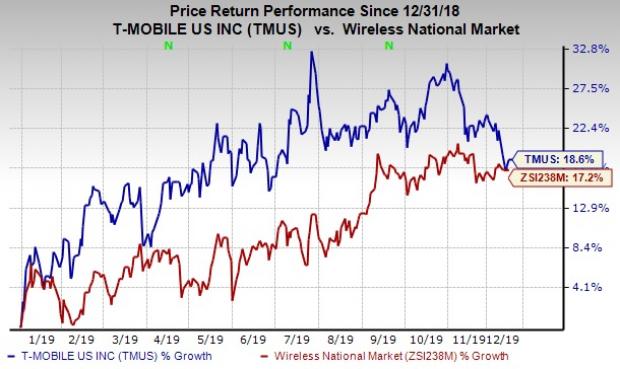 Skechers (SKX) Up 18% in 3 Months: Will the Momentum Prevail?