2019 Hits a Purple Patch So Far: Check the Movers & Shakers

The easing U.S.-China trade tensions and a generous interest rate cut by Federal Reserve helped major benchmarks’ rally in 2019. Here are five stocks that gained big this year and are poised to grow in 2020.

Major benchmarks posted their sixth straight win before closing notches lower on Dec 18. But this rally is merely part of what the Wall Street has witnessed throughout the year in terms of records.

Coming to the tech-heavy Nasdaq composite, several record highs were made in the second half of this year. The index closed in positive territory, finishing at 8,827.73 on Dec 18, continuing with a six-day winning momentum on the trot. The tech-laden benchmark has increased 27.5% so far this year.

What’s more, both the S&P 500 and Nasdaq are on track to achieve the highest yearly draws since 2013. The broader index has risen 29.6% while the tech-laden Nasdaq has surged 38.32% year to date.

However, despite hitting the high notes, the Dow’s top-rated Boeing was a big reason for the index’s underperformance in 2019. Boeing’s 737 MAX jetliner’s fallout had outshined the Dow’s stalwart as it is known to weigh the highest among the 30 stocks that make up the index. The Dow Jones Industrial Average has grown 23% so far this year

Rationale Behind the Rally

The second half of the year saw a series of events that provided an impetus to the Wall Street. The protracted trade war between the United States and China finally seem to subside. After imposing a series of higher tariffs on each other since 2018, both economic giants finally relented to a truce and agreed to ink a deal in mid-October.

In the beginning of the month, the United States cancelled levying higher tariffs scheduled for Oct 15 and initiated a “phase one” deal talk with China. Further, China agreed to purchase more agricultural products. The deal, however, is due to be signed in January 2020.

The Fed’s three consecutive rate cuts since July has kept the economy expanding for 11 years now. This rate reduction by the central bank erased nearly half of all the rate hikes in the past two years. The regulatory body is consistently reviewing the recession-fighting toolkit to shield the U.S. economy from further downturns and after the current year-end meeting, Fed announced that it will keep interest rates steady throughout next year.

The tech-laden Nasdaq seems to have benefited from the adoption of cloud computing and the rising infusion of AI. Additionally, innovation in electronic devices, especially in wearables, and smart-connectivity solutions gave a thrust to tech stocks.

Overall, the technology sector observed a substantial rise even after bearing the brunt from trade feuds. The Technology Select Sector SPDR Fund (XLK) has soared 45.2% so far this year.

Given the superb performance of the major indexes this year, we shortlisted five stocks that have outperformed the stock market in 2019 so far and are poised to beat the industry’s growth estimate next year. Moreover, these stocks flaunt a Zacks Rank #1 (Strong Buy). You can see the complete list of today’s Zacks #1 Rank stocks here.

Fulgent Genetics, Inc. FLGT provides genetic testing services to physicians with clinically actionable diagnostic information. The company’s expected earnings growth rate for 2020 is 38.9% compared with the Zacks Medical Info Systems industry’s projected earnings growth of 22.1%. The Zacks Consensus Estimate for the company’s current-year earnings has been revised 80% upward over the past 60 days.

Fulgent Genetics has skyrocketed 318% so far this year, surpassing the Medical Info Systems industry’s rise of 21.9%.

Teekay Tankers has jumped 204.7% so far this year, outperforming the Transportation - Shipping industry’s rally of 23.7%.

Ultra Clean Holdings, Inc. UCTT designs, develops, manufactures and tests production tools, modules plus subsystems for the semiconductor and display capital equipment industries. The company’s expected earnings growth rate for the upcoming year is 47.4% compared with the Zacks Electronics - Manufacturing Machinery industry’s projected earnings growth of 33.1%. The Zacks Consensus Estimate for the company’s current-year earnings has been raised 23.4% over the past 60 days.

Boot Barn Holdings, Inc. BOOT is a lifestyle retail chain, offering western and work-related footwear, apparel and accessories for men, women and kids. The company’s expected earnings growth rate for next year is 19.3% compared with the Zacks Retail - Apparel and Shoes industry’s projected earnings growth of 16.2%. The Zacks Consensus Estimate for the company’s current-year earnings has been lifted 5.4% over the past 60 days.

Boot Barn Holdings has gained 158.5% so far this year versus the Retail - Apparel and Shoes industry’s decline of 21.5%.

Sonic Automotive, Inc. (SAH - Free Report) is an automotive retailer, which engages in the sale of new and used cars and light trucks plus replacement parts; provision of vehicle maintenance, manufacturer warranty repair, and paint and collision repair services; and arrangement of extended warranties, service contracts, financing as well as insurance. The company’s expected earnings growth rate for next year is 15.8% compared with the Zacks Automotive - Retail and Whole Sales industry’s projected earnings growth of 9.4%. The Zacks Consensus Estimate for the company’s current-year earnings has been upped 8.1% over the past 60 days.

Sonic Automotive has gained 137.5% so far this year, higher than the Automotive - Retail and Whole Sales industry’s rise of 56.2%. 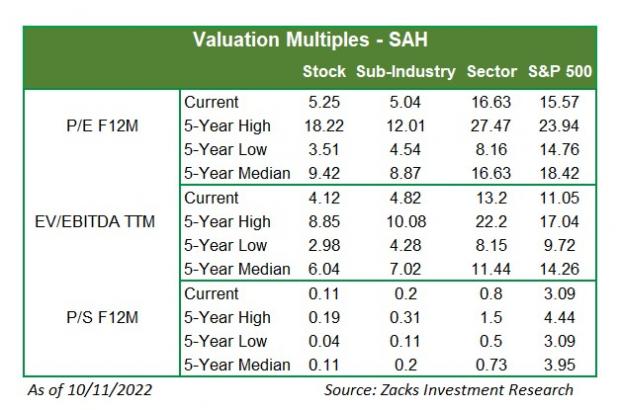 Delta Buries the Hatchet With A4A, Set to Rejoin Next Year