Wall Street started 2019 on a solid note, quickly erasing the loss it suffered in 2018. The momentum continued throughout the year, barring some short-term fluctuations. The U.S. economy is in good shape with a robust labor market, higher consumer spending and a dovish monetary stance taken by the Fed. U.S. GDP in the first three quarters of 2019 also surpassed expectations despite the fact that the economy is growing for the historically longest span of 11 years.

Moreover, the possibility of the signing of the phase-one trade deal between the United States and China in early January significantly boosted investors’ sentiment in December. This is a major step toward resolving a nearly two-year long trade dispute between the two largest trading countries of the world. This trade dispute and subsequent tariff war not only affected the economies of the United States and China but also slowed global economic growth.

On Dec 13, the United States and China declared that they have reached a phase-one trade deal likely to be signed by the two presidents in the first half of January. U.S. Trade Representative Robert Lighthizer said the deal will address intellectual-property disputes along with strong enforcement provisions and financial services and currency issues in addition to tariff rollback and higher agricultural purchase.

On Dec 23, The Wall Street Journal reported that China’s cabinet has agreed to lower tariffs for all trading partners on more than 859 types of products including pharmaceuticals, frozen pork and some high-tech components to below the rates that most-favored nations enjoy.

Investment in mid-cap stocks is often recognized as a good portfolio diversification strategy. These stocks combine attractive attributes of both small and large-cap stocks. If the trade deal breaks down, mid-cap stocks will be less susceptible to losses than their large-cap counterparts owing to less international exposure.

However, if the trade deal finally sees the light of the day, these stocks will gain higher than small caps due to established management teams, a broad distribution network, brand recognition and ready access to capital markets.

At this stage, it will be prudent to invest in mid-cap stocks, which have skyrocketed in 2019 and still hold strong potential for 2020.  However, selection of these stocks can be difficult. This is where our VGM Score comes in handy. We have narrowed down our search to five stocks with a Zacks Rank #1 (Strong Buy) and a VGM Score of A. You can see the complete list of today’s Zacks #1 Rank stocks here.

The chart below shows year-to-date price performance of our five picks. 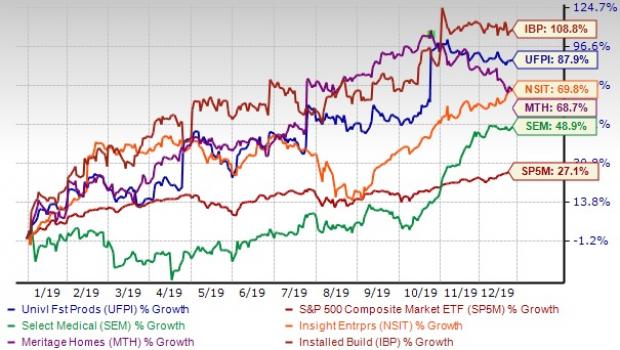 The company has an expected earnings growth rate of 14.4% for the next year. The Zacks Consensus Estimate for the next year has improved 7.2% over the past 60 days. The stock has rallied 108.8% year to date.

The company has an expected earnings growth rate of 16.8% for the next year. The Zacks Consensus Estimate for the next year has improved 4.6% over the past 60 days. The stock has climbed 87.9% year to date.

The company has an expected earnings growth rate of 15.3% for the next year. The Zacks Consensus Estimate for the next year has improved 10.9% over the past 60 days. The stock has soared 69.8% year to date.

Meritage Homes Corp. (MTH - Free Report) is one of the leading designers and builders of single-family homes in the United States. It operates through two segments, Homebuilding and Financial Services.

The company has an expected earnings growth rate of 20.3% for the next year. The Zacks Consensus Estimate for the next year has improved 1% over the past 60 days. The stock has surged 68.7% year to date.

The company has an expected earnings growth rate of 21% for the next year. The Zacks Consensus Estimate for the next year has improved 8% over the past 60 days. The stock has advanced 48.9% year to date.

Tesla Secures 5-Year Worth $1.4B Loan for Shanghai Factory