Tesla to Start Delivery of Model 3 Built at China Gigafactory

Tesla, Inc. (TSLA - Free Report) will start delivering Model 3 vehicles built at its Gigafactory3 in Shanghai from today, per Reuters.

Notably, Gigafactory3 is China’s first completely foreign-owned car plant. Tesla started construction of the plant in January and began production in October. The company intends to produce 250,000 vehicles a year after Model Y production is added in the initial phase.

Today the plant will start delivering to customers just 357 days after construction of the factory started, thereby establishing a new record for global automakers in China.

The first 15 customers, who are slated to get their Model 3 cars, are employees of Tesla. Notably, the company wants to start delivering the cars, priced at $50,000 before subsidies, to the public before the start of the China New Year on January 25. The deliveries are not likely to affect Tesla’s financials for the fourth quarter.

The Gigafactory3 in Shanghai has been built as part of Tesla’s plan to boost presence in the world’s largest auto market, China, and reduce the impacts of the U.S.-China trade war.

Tesla treats China differently than anywhere else, with offerings such as showroom parties and racing events. Notably, it is also building service centers and charging stations throughout China to ensure reliable after-sales service to customers.

The Ministry of Industry and Information Technology recently stated it added China-made Model 3 of Tesla to a list of new energy vehicles that are excluded from purchase tax.

Shares of Tesla have outperformed the industry it belongs to over the past year. Its shares have appreciated 29.3% compared with the industry’s growth of 24.3%. 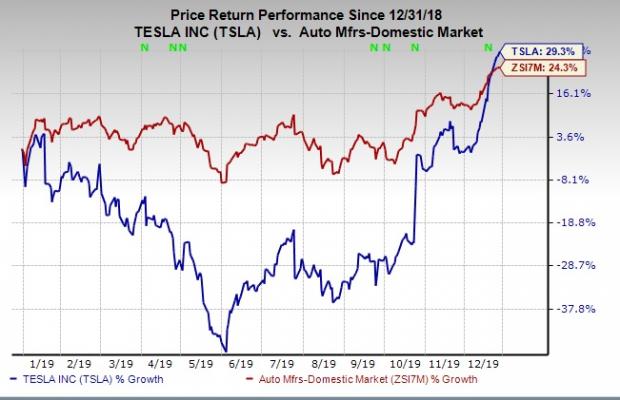 The company is making efforts to improve vehicle deliveries, sequentially and annually, with some expected fluctuations due to seasonality. It is confident that it will exceed 360,000 vehicle deliveries in 2019. The company expects positive free cash flow as well as net income in the upcoming period, with possible temporary exceptions, particularly around the launch and ramp-up of newer products.

Alnylam Stock Up More Than 61% YTD on Pipeline Progress