Shares of Norfolk Southern Corporation (NSC - Free Report) have surged more than 30% in 2019 compared with the industry’s 28.6% rally. 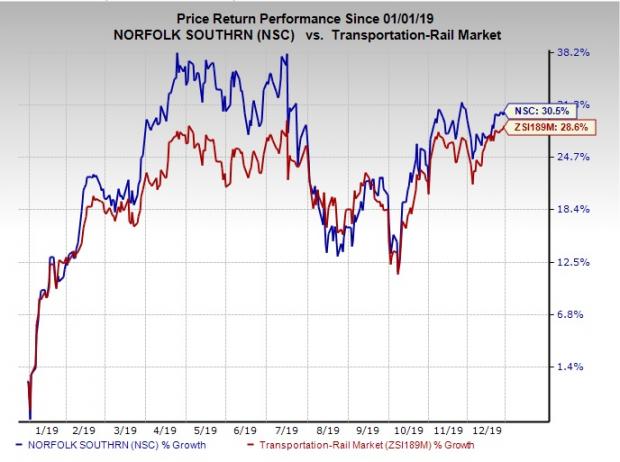 Reasons Behind the Price Rise

Norfolk Southern’s measures to streamline operations by cutting costs are also paying off. Evidently, the company’s operating ratio (operating expenses as a percentage of revenues) improved in each of the three quarters of 2019. It anticipates this key metric to show an improvement in 2019, over 65.4% achieved in 2018. Additionally, the company aims for a full-year operating ratio of 60% by 2021.

Further, a robust free cash flow generation ($1.5 billion generated in the first nine months of 2019) enabled the company to frequently reward its shareholders. In the first nine months of 2019, the company returned $2.3 billion to its shareholders through dividends ($705 million) and buybacks ($1,595 million). Norfolk Southern hiked its dividend payout twice in 2019.

Going into 2020, the company will continue to witness impressive bottom-line growth owing to its cost-cutting measures. The easing trade tensions (phase one trade deal reached between the United States and China) add to the positivity.

However, there are a few setbacks that might linger into 2020. The company’s automotive sub-group (part of its merchandise division) is witnessing declining volumes due to decelerating vehicle production in the United States and the scenario is unlikely to change drastically any time soon. Persistent below-par performance of other key components of the merchandise segment, such as forest and consumer plus metals and construction, might drag into next year. Additionally, contracting coal and intermodal volumes might weigh on the company’s growth prospects in 2020.

Consequently, the Zacks Consensus Estimate for 2020 earnings has been revised 4.7% downward over the past 90 days.

Shares of Hawaiian Holdings, Ryanair Holdings and GATX have gained more than 12%, 21% and 19%, respectively, in a year’s time.