CenturyLink, Inc. (CTL - Free Report) has undergone management restructuring with the departure of two board members — Glen F. Post III and Harvey Perry at 2020 annual shareholder meeting. This reshuffle is likely to ensure brighter prospects for the company by aligning its competent governance practices with the overall interests of employees, shareholders and customers.

Glen has stepped down from his position as director after serving for 34 years in the Monroe-based company. Prior to CenturyLink, he had substantial work experience in companies like Oak Hill Capital Partners and FedEx Corporation (FDX - Free Report) .

Under the leadership of Post, the networking technology behemoth merged with Broomfield-based telco company — Level 3 Communications — at a whopping valuation of $34 billion. The amalgamation enabled CenturyLink to connect more than 350 metropolitan areas with above 100,000 fiber-enabled, on-net buildings, including 10,000 buildings in EMEA and Latin America. Markedly, it offers customers an extensive range of avant-garde technology solutions over a large-scale fiber-rich global network.

Further, non-executive board chairman — Harvey Perry — announced his retirement, effective May 2020. He will be succeeded by T. Michael Glenn. In addition, the company has appointed Hal Jones to its board of directors, effective Jan 1, 2020. After his appointment, the board will ultimately have 14 members.

At the same time, CenturyLink implemented several changes in its governance guidelines. These include a board size of 10-12 directors with average tenure of up to 10 years, flexibility of reshuffling the committee after every five years and ensuring that all non-CEO board members are independent.

With more than 52,000 employees in 60 countries, CenturyLink is shifting focus from integration to transformation efforts in order to fortify its position in the global market. It intends to transform its business operations through product evolution and digitizing of customer interactions, which portends well for top-line growth.

It is focused on bringing improved operational efficiencies through various methods, including network simplification and rationalization, which would aid in improving its end-to-end provisioning time and drive standardization. Strong network capabilities, integrated hosting and network solutions are likely to promote growth in its cloud business.

CenturyLink has a long-term earnings growth expectation of 7.4%. The stock has gained 12.5% compared with the industry’s rise of 7.8% in the past six months. 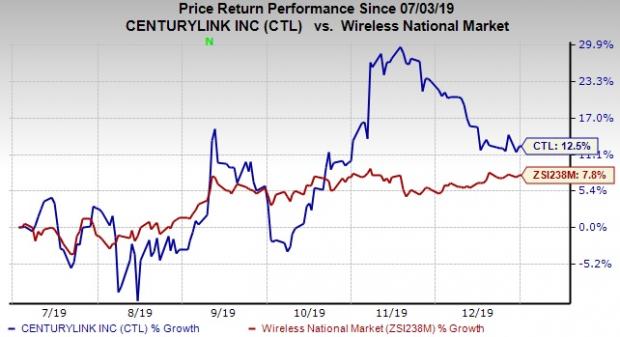 Qualcomm exceeded the Zacks Consensus Estimate for earnings in each of the trailing four quarters, the average surprise being 8.7%.