Shares of American Airlines (AAL - Free Report) have underperformed its industry in a year’s time, mainly impacted by the multiple flight cancellations due to the prolonged grounding of the 24 Boeing 737 MAX jets in its fleet. Shares of this Fort Worth, TX- based carrier have shed 9.2% of their value over the past year compared with the industry’s 13.3%. 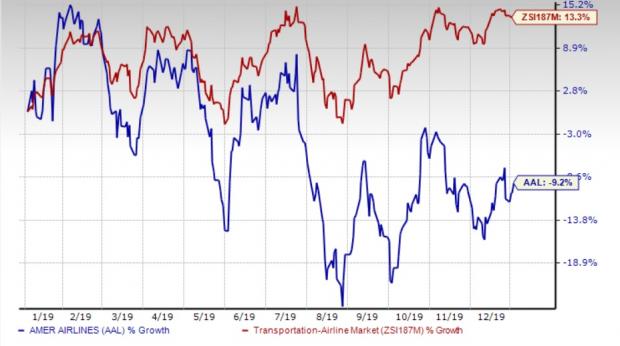 American Airlines, currently carrying a Zacks Rank #4 (Sell), expects pre-tax income to have been hurt to the tune of roughly $540 million due to these groundings. In the face of such significant loses, it is no surprise that the carrier is negotiating with The Boeing Company (BA - Free Report) for compensation. Moreover, the carrier aims to share part of the compensation with its workers under the company’s profit-sharing scheme, thereby reflecting American Airlines’ employee-friendly approach.

Notably, American Airlines is not the only U.S.-based carrier to have sought compensation from Boeing due to losses related to the Max grounding. In December 2019, Southwest Airlines (LUV - Free Report) , which enjoys the largest exposure to Boeing 737 MAX jets among U.S. carriers with 34 such jets in its fleet, inked a deal with the plane manufacturer for partial compensation for losses due to the groundings. However, details of the deal remain undisclosed. Some other 737 MAX customers, including Turkish Airlines, too have signed deals with Boeing seeking compensation for losses.

As a reminder, all U.S.-registered Boeing 737 MAX jets have been grounded since March 2019 after these were involved in two fatal air crashes in different parts of the world over a span of five months, apparently due to software malfunctioning.

Apart from Southwest Airlines and American Airlines, United Airlines (UAL - Free Report) is the other U.S.- based carrier to operate Boeing 737 MAX jets. Notably, this Chicago-based carrier has 14 such jets in its fleet. With no clarity available as to when the jets would resume flying, American Airlines, Southwest Airlines and United Airlines currently expect the Boeing 737 MAX jets in their respective fleets to remain grounded through Apr 7, Apr 13, and Jun 4, 2020, respectively.

Here's Why You Should Hold Autoliv (ALV) in Your Portfolio