Sony Corporation (SNE - Free Report) is developing a silicon-based vision sensor for autonomous vehicles in order to gain a foothold in the electronics market. The Tokyo, Japan-based company is joining the race to develop LiDAR (Light Detection and Ranging) vision-sensing technology, which is a vital part for safety and functionality in self-driving vehicles.

Self-driving cars, which are set to disrupt the automobile industry, have already hit the roads of California, Texas, Arizona, Washington, Pennsylvania, Michigan and other U.S. states and countries. However, as of now, their mobility is restricted to specific test areas and driving conditions. Markedly, LiDAR acts as an eye of self-driving vehicles providing them a 360-degree view. The sensors allow autonomous vehicles to see roads and obstacles by emitting laser beams that are then reflected back at them.

A 3D representation is created by measuring the speed of light and the distance covered by it, which helps to determine the vehicle’s position with other surrounding objects. The image monitors the distance between the other passing by vehicle and any other vehicle in front of it. It helps to command the brakes to slow or stop the vehicle. When the road ahead is clear, it also allows the vehicle to speed up.

With the help of LiDAR, autonomous vehicles can travel smoothly and avoid collisions by detecting the obstructions ahead. This improves the safety of the commuters and makes autonomous cars less prone to accidents. However, current models are bulky, sitting on a vehicle’s roof, and are also one of the most expensive parts of self-driving vehicles.

Interestingly, Sony’s LiDAR is likely to be more affordable and resistant to vibrations, owing to the development of a lower-cost silicon chip that allows long distances to be measured with high precision. The expansion of Sony’s offering of vehicle components comes as a significant change of pace, six years after the group first announced that it would sell image sensors for cars.

Having struggled to make money from selling smartphones, the company has since found notable success in producing image sensors for them. Sony, which is considered to be the world’s leading provider of camera sensors, had communicated that it is working round the clock to manufacture image sensors, which are used in mobile phone cameras. But even a 24-hour operation hasn’t been enough to keep up with the increasing demand.

It is more than doubling its capital spending on the semiconductor business to ¥280 billion in the ongoing fiscal, and is building a new plant in Nagasaki that will be operational from April 2021. The company believes that converting its business units into distinct subsidiaries will enhance its organizational independence as each independent unit sets high targets in an effort to accomplish its mid-term targets. These steps will allow it to generate sustainable profit, accelerate decision-making processes and reinforce business competitiveness. Collaborations and state-of-the-art product launches are likely to benefit its top line amid a challenging business environment and rapidly evolving technology cycles.

For second-quarter fiscal 2019, Sony’s net income increased 8.6% year over year to ¥187.9 billion or ¥148.59 per share, primarily attributable to lower expenses. The bottom line beat the Zacks Consensus Estimate by 31 cents. Total expenses were ¥1,845.7 billion, down 5.1% year over year, due to lower cost of sales and SG&A expenses. Operating income was ¥279 billion, up 16.5%, driven by significant increase in operating income in the Imaging & Sensing Solutions and Electronics Products & Solutions segments. In the recent years, the firm achieved sales and profitability growth in the Game & Network Services, Imaging & Sensing Solutions (formerly Semiconductors) and Music segments.

Shares of Sony have gained 40.3% compared with the industry’s growth of 35.6% in the past year. It topped estimates in each of the trailing four quarters, the surprise being 86.9%, on average. It has a long-term earnings growth expectation of 7.7%. 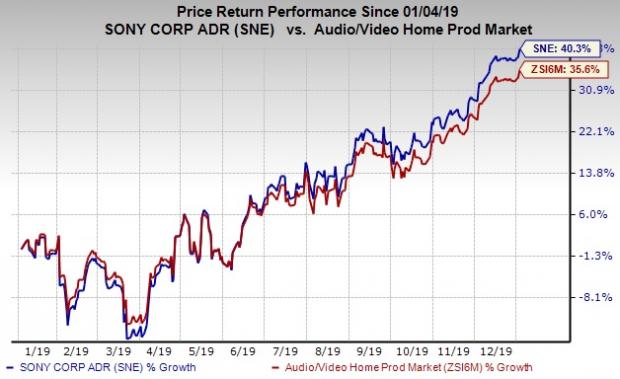 Sony currently sports a Zacks Rank #1 (Strong Buy) and has a VGM Score of A.

PCTEL topped earnings estimates in each of the trailing four quarters, the beat being 150.6%, on average.

Is Nexstar Media (NXST) a Great Pick for Value Investors?