Gold price jumped in the beginning of this year providing a New Year bonanza to bullion investors. There was a downward spiral from the beginning of the fourth quarter of 2019 after a rally in the price of the yellow metal during the June-September period. However, an airstrike by the U.S. government in Iran that killed its military general Qasem Soleimani, once again started a rally for this precious metal.

On Jan 7, gold futures for February delivery were up $5.5 or 0.4% to close at $1,574.30 per ounce. Earlier in the day, gold price crossed the psychological barrier of 1,600 per ounce for the first time since 2013. Gold price currently stands at the highest in seven years.

Gold price completed its winning streak for the 10th consecutive day on Jan 7, marking its longest period of gains after 11 days of wins booked from December 2017 to January 2018. Moreover, the closing price of Jan 7 marked the highest settlement for the most-active contract for a second straight session since Apr 9, 2013.

The gold price rally, which started at the beginning of 2020, was driven by sudden escalation in geopolitical conflict between the United States and Iran. Clueless about the potential impact of this political tussle on stock markets, investors shifted toward safe-haven securities like gold rather an investing in risky assets like equities.

Moreover, the U.S.-Iran conflict resulted immediately in a surge in crude oil prices lifting them to a four-year high level. Higher oil price will act as a significant stumbling block for the economic revival of several emerging markets as these countries depend heavily on oil imports for their industrial turnaround.

Notably, the U.S. manufacturing sector is also reeling under recession and a recent report by the Institute of Supply Management revealed that U.S. manufacturing contracted the most in December 2019 in more than a decade. Higher crude oil price will further jeopardize the situation. All these factors may generate stock market volatility, forcing investors to diversify to safe heaven assets.

Several major central banks, including the Fed are pursuing easy monetary policies, resulting in a lower interest rate. In fact, the European Central Bank and Bank of Japan have adopted a zero interest rate policy for more than a year. Negative interest rate is forcing investors to park their money in other avenues rather than bank deposits and debt securities. Lower interest rates decrease the opportunity cost of holding non-yielding bullion, making gold cheaper for investors holding other assets.

Buying pressure on gold is likely to remain firm as investors will focus on precious metals as a store of wealth and hedge against market turmoil.  Additionally, central banks are buying golds for rapid balance sheet expansion, resulting in a gold price rally.

According to a recent report by Goldman Sachs, wealthy people are stocking up on physical gold, as in bullion, coins and bars. The research firm raised its target price for gold to $1,600 per ounce in 2020. Heritage Capital projected gold price in the range of $2,500, $3,000 an ounce in 2020, citing recession concerns and political uncertainty. Altavest estimated a rally in the $1,650 to $1,750 per ounce range in the months ahead.

At this stage, it will be prudent to invest in gold stocks with strong growth potential. We have narrowed down our search to five such stocks.. Each of these stocks carries a Zacks Rank # 2 (Buy). You can see the complete list of today’s Zacks #1 Rank (Strong Buy) stocks here. 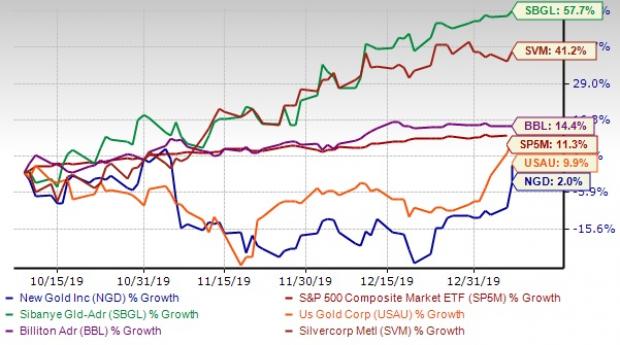 Sibanye Gold Ltd. operates as a precious metals mining company in South Africa, the United States, Zimbabwe, Canada, and Argentina. It produces gold, palladium, platinum, and rhodium, and by-products, such as iridium, ruthenium, nickel, copper and chrome. The company has an expected earnings growth rate of 587.5% for the current year. The Zacks Consensus Estimate for next year has improved by 0.6% over the last 60 days.

New Gold Inc. (NGD - Free Report) is an intermediate gold mining company, engaged in the development and operation of mineral properties. It primarily explores for gold, silver and copper deposits. The company has an expected earnings growth rate of 160% for the current year. The Zacks Consensus Estimate for next year has improved by 100% over the last 60 days.

U.S. Gold Corp. (USAU - Free Report) operates as a gold exploration and development company in the United States. It explores for gold, copper, silver and zinc minerals. The company has an expected earnings growth rate of 36.4% for the current year (ending April 2020). The Zacks Consensus Estimate for next year has improved by 31.7% over the last 60 days.

BHP Group plc is engaged in mining of copper, silver, lead, zinc, molybdenum, uranium, gold, iron ores, metallurgical and energy coal. The company has expected earnings growth of 8.5% for the current year (ending June 2020). The Zacks Consensus Estimate for the current year has improved by 2.1% over the last 60 days.

Silvercorp Metals Inc. (SVM - Free Report) engages in the acquisition, exploration, development and mining of precious and base metal mineral properties in the Peoples Republic of China. It explores for silver, gold, lead, and zinc properties. The company has an expected earnings growth rate of 31.6% for the current year (ending March 2020). The Zacks Consensus Estimate for next year has improved by 13.6% over the last 60 days.