Constellation Brands Inc. (STZ - Free Report) has delivered stellar third-quarter fiscal 2020 results, wherein the top and bottom lines surpassed the Zacks Consensus Estimate. With this, the company reported earnings and sales beat in the last eight consecutive quarters. Results were primarily aided by strength in the beer business and strong margins. Further, the company raised its earnings and cash flow guidance for fiscal 2020.

Net sales improved about 1% to $1,999 million and surpassed the Zacks Consensus Estimate of $1,955 million.

Notably, depletions for Modelo Especial grew 15%, which was ranked the fourth beer brand in the entire U.S. beer category. Meanwhile, the Corona Brand Family grew 7% in IRI channels on sustained strength of Corona Premier and Corona Refresca as well as renewed growth of Corona Extra.

However, sales at the wine and spirits segment declined 9.7% to $688.8 million in the fiscal third quarter. The downside resulted from a 13.5% fall in shipment volume and an 11.7% decline in depletions. Organic net sales for the segment fell 8.7%.

Further, the operating margin at the beer segment increased 200 bps to 39.3%, owing to gains from favorable pricing and cost of goods sold (COGS), which were partly offset by higher marketing expenses. However, the wine and spirits segment’s operating margin contracted 80 bps to 26.2%, owing to higher COGS and SG&A expenses, as a percentage of sales, which was partly offset by mix benefits.

Constellation Brands ended the fiscal third quarter with cash and cash equivalents of $93.7 million. As of Nov 30, 2019, it had $11,339.7 million in long-term debt (excluding current maturities) along with total shareholders’ equity of $12,036.3 million.

On Jan 7, 2020, the company announced a quarterly dividend of 75 cents per share for Class A and 68 cents for Class B stock. The dividend is payable Feb 25 to its shareholders of record as of Feb 11.

Driven by the strong free cash flow generated in the fiscal year so far, the company is on track to return $4.5 billion in cash to shareholders through share repurchases and dividends by fiscal 2022. Further, its debt reduction of $1.3 billion in the first nine months of fiscal 2020 keeps it on track to achieve its leverage target of less than four times.

As part of its wine and spirits transformation strategy, the company recently agreed to revise the terms of its original deal, pertaining to the divestiture of its certain wine and spirits business to E. & J. Gallo Winery. The Federal Trade Commission’s (“FTC”) competitive concerns related to the Sparkling Wine, Brandy, Dessert Wine and Concentrate categories prompted the revision of the deal. The transaction, subjected to the FTC’s approval, is now likely to conclude by fiscal 2020 end.

In a separate but related deal, the Corona brewer entered an agreement with E. & J. Gallo to divest its New Zealand-based Nobilo Wine brand and related assets worth $130 million. The transaction, which is likely to conclude in the first half of fiscal 2021, is subjective to the FTC’s and New Zealand’s regulatory approvals.

Further, Constellation Brands signed an agreement with Kings & Convicts Brewing Co. to sell the Ballast Point brand and related assets for an undisclosed amount. The sale will include Ballast Point-related production facilities and brewpubs (five in California and one in Chicago). However, Constellation Brands plans to retain the Craft & Specialty facility in Daleville, VA.

Management updated guidance for fiscal 2020. The company provided earnings per share projections on a GAAP basis and comparable (excluding Canopy) basis. Further, the guidance assumes the revised wine and spirits transaction to sell a portion of the business to E. & J. Gallo Winery to close at the end of fiscal 2020. Moreover, the separate but related agreement to divest the Nobilo Wine brand to Gallo is expected to close in the first half of fiscal 2021. The additional gain or loss from these transactions is not accounted for in the revised guidance. Proceeds from the transactions are expected to be used for debt repayment.

Certain other factors were also taken into consideration in providing earnings guidance. These include an interest expense expectation of $430 million. Further, the company expects tax rate of 97-99% and weighted average diluted shares outstanding of 195 million.

For fiscal 2020, Constellation Brands anticipates capital expenditure of $700-$800 million, with $560 million estimated to be incurred for the expansion of Mexico beer operations. The company now expects to generate operating cash flow of $2.2-$2.4 billion for fiscal 2020. Its free cash flow expectation for fiscal 2020 is now $1.5-$1.6 billion compared with $1.3-$1.4 billion mentioned earlier. 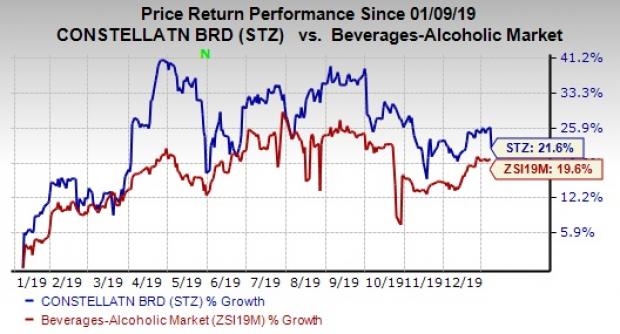 2 Key Picks From the Beverage Industry