In the past five trading days, telecom stocks trended down as geopolitical tensions rattled the market and threatened to spoil the initial euphoria associated with the likely signing of the “Phase One” trade deal between the United States and China. With oil prices expected to remain highly volatile until the Middle East conflicts deescalate, the industry is poised to face sterner tests as the year gradually progresses. In addition, heightened cybersecurity threats have created a feeling of mistrust and fueled uncertainty within the rank and files of the sector.

A Chinese trade delegation led by Vice Premier Liu He is slated to touch the American shores next week for the formal inking of the partial trade accord. This follows the recent report that revealed that U.S. trade deficit has fallen to a three-year low, largely due to higher exports and lower import basket, primarily led by a decline of imports from China. Thanks to the “Phase One” deal, the trade deficit is likely to dip further as China has reportedly pledged to purchase $200 billion of goods over the next two years, including $40-$50 billion of agricultural products each year.

Just when it seemed that the worst is almost over for the beleaguered industry, a fresh turmoil in the Middle East erupted with the Trump administration assassinating a top Iranian general through drone attacks, and Iran retaliating with missile attacks at U.S. airbases in Iraq. Although both countries have stepped back from the brink of a war, a shadow warfare and proxy wars could take centerstage as cybersecurity threat intensifies. Iran has historically launched several potent cyberattacks, breaching United States’ cyber defenses and potentially harming finance, telecom and energy sectors. Despite significant technological advances, several smaller U.S. firms are still vulnerable to such attacks, risking the safety and security of sensitive data. This, in turn, has created an element of insecurity within the industry, triggering a downtrend.

In order to avert potential cyber aggression with increased 5G deployment, the House of Representatives passed three bipartisan 5G security bills in the past week that had advanced through the Committee last year. These include the Secure 5G and Beyond Act, which entails the administration to create an “unclassified national strategy” to protect consumers and allies from potential threats to 5G systems, thereby protecting the “competitiveness” of U.S. firms. Two other bipartisan bills – the Promoting United States International Leadership in 5G Act and Promoting United States Wireless Leadership Act – would require the administration to become more involved in international standard-setting bodies around wireless networks. This is likely to encourage participation by U.S. firms and other stakeholders in developing standards for 5G networks and future generations of communications networks.

Meanwhile, a U.S. lawmaker has introduced a bill to prevent sharing of key intelligence with countries that allow Chinese telecommunication equipment manufacturer Huawei to operate 5G network technology within their borders. The strategic move is the latest ploy by the United States to thwart the growing emergence of Huawei as 5G deployment picks up pace across the globe.

2.      Ericsson (ERIC - Free Report) has inked a definitive agreement with Saudi Arabia’s telecommunications service provider Mobily to accelerate the digitization and IoT drive across the country. The deal is likely to foster the development of 5G technology in Saudi Arabia and facilitate the carrier to significantly scale up traditional wireless networks to provide 5G services to varied customers.

3.      T-Mobile US Inc. (TMUS - Free Report) recently offered a preliminary view of its customer growth trajectory for the fourth quarter and full-year 2019 to showcase the inherent strength of its resilient business model amid a competitive and cut-throat business environment.

For fourth-quarter 2019, T-Mobile recorded an impressive 1.9 million net customer additions, representing the 27th consecutive quarter in which more than 1 million customer additions were witnessed. The company ended the year with a total customer base of 86 million with branded postpaid phone churn of 1.01%. While branded post-paid net additions for the quarter were 1.3 million, the same for branded pre-paid aggregated 77,000. (Read more: T-Mobile Records 7 Million Net Customer Additions in 2019)

4.     BlackBerry Limited (BB - Free Report) announced that it has collaborated with Amazon Web Services, Inc. – the cloud computing platform of Amazon.com, Inc. – for the development of secure and intelligent connected vehicle software platform for in-vehicle applications. The partnership seeks to integrate BlackBerry QNX real-time operating system with AWS’ IoT services in the cloud and in the car to develop a comprehensive edge-to-cloud offering for the global automotive industry.

Management currently expects fourth-quarter revenues to lie within $92 million to $100 million, up from prior expectations of $83-$95 million. The improved outlook includes recurring revenues in the range of $74 million to $77 million compared with previous expectations of $74 million to $78 million. The revised guidance is primarily attributable to a new consumer electronics licensee, which the company signed in the second half of December. (Read more: InterDigital Raises Q4 Revenue Guidance on Licensee Addition) 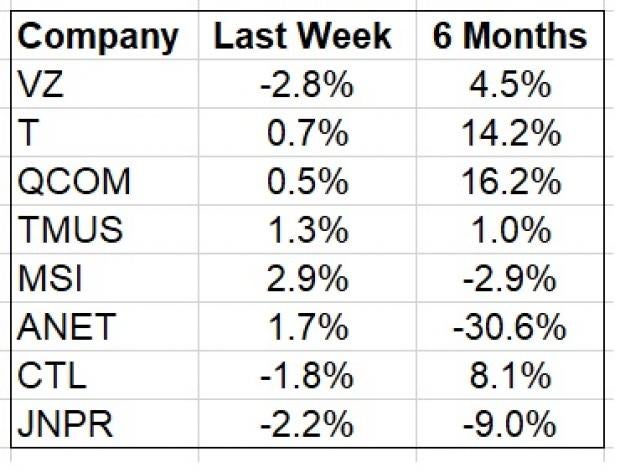 Over the past six months, the Zacks Telecommunications Services industry has recorded average growth of 3.8% and the S&P 500 has rallied 9.3%.

In addition to product launches, strategic deals and 5G deployments, all eyes will remain glued to how the government deescalate the Middle East tensions and handles the various issues relating to the inking of the “Phase One” deal.