Including the after-tax costs related to the company’s Foundation for Growth initiative, net earnings for the quarter were 77 cents compared with the net earnings of 11 cents recorded in the prior-year quarter.

Lindsay generated revenues of $109 million, down 2.3% year over year. The revenue figure also missed the Zacks Consensus Estimate of $112 million. This downside resulted from the business divestitures in the irrigation segment as part of the Foundation for Growth initiative.

Cost of operating revenues slipped 10% year over year to $75 million. Gross profit increased 19% to $34 million from the $29 million witnessed in the year-earlier quarter. Gross margin came in at 31.1% compared with the 25.6% recorded in the year-ago quarter.

The Irrigation segment revenues declined 6% year over year to $82.4 million in the fiscal first quarter. North America irrigation revenues were down 6.8% from the year-ago quarter, due to the divestiture of a company-owned dealership. Also, higher irrigation equipment unit volume was offset by the impact of lower average selling prices and bleak sales of replacement parts. International irrigation revenues decreased 4.5% year over year, mainly due to the negative impact of changes in foreign currency-translation rates.

The segment’s operating income rose 23.4% year over year to $9.8 million. Operating margin in the reported quarter was 11.8% compared with the prior-year quarter’s 9%.

The Infrastructure segment revenues increased 11.1% year over year to $27 million, driven by higher year-over-year sales of road safety products and Road Zipper System lease revenues. The segment reported operating income of $8.8 million compared with the operating income of $4.3 million recorded in the prior-year period. The segment’s operating margin came in at 32.4% in the fiscal first quarter compared with the prior-year quarter’s 17.6%. This improvement can be attributed to a more favorable revenue mix, and improved cost and pricing performance compared with the prior year.

Per the company, the recent progress regarding the preliminary trade agreement between the United States and China bodes well for agricultural exports, in turn benefiting farmers The company expects to see overall growth in international irrigation, driven by improvement in Brazil and developing markets.

The infrastructure segment is anticipated to deliver an improved performance, backed by strong growth in Road Zipper. Additionally, it expects improvement in operating margin through the execution of projects, which are part of the Foundation for Growth initiative. 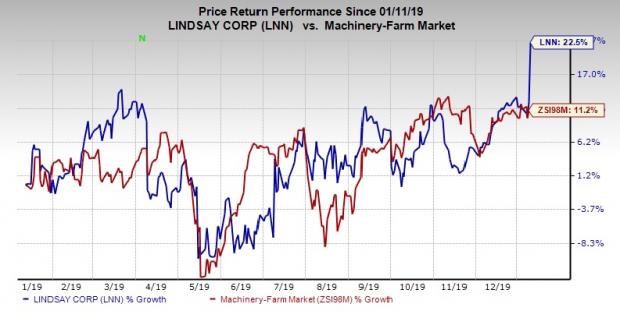 Over the past month, shares of Lindsay have appreciated 22.5%, outperforming the industry’s growth of 11.2%.

Lawson Products has an expected earnings growth rate of 59% for the current year. The stock has surged 91% over the past year.

Hickok has a projected earnings growth rate of 12.2% for 2020. The company’s shares have soared 93% over the past year.

DXP Enterprises has an estimated earnings growth rate of 10.5% for the ongoing year. In a year’s time, the company’s shares have appreciated 21%.