Recently, Nokia Corporation (NOK - Free Report) communicated that it has reached 63 commercial 5G contracts worldwide with 18 live networks to date. The Finnish telecom equipment maker’s 5G technology has been contracted by all four nationwide operators in the United States, all three in South Korea and all three in Japan. Solid momentum is a reflection of its sustained leadership in cellular technology R&D and standardization. Nokia’s share price rose 0.25% in Friday’s trading session to close at $4.02.

Nokia’s end-to-end portfolio includes products and services for every part of a network, which are helping operators to enable key 5G capabilities such as network slicing, distributed cloud and industrial IoT. It facilitates customers to move from an economy-of-scale network operating model to demand-driven operations by offering easy programmability and automation. It is witnessing healthy underlying momentum in its focus areas of software and enterprise, which augurs well for its licensing business.

The company is expanding its business into targeted, high-growth and high-margin vertical markets to address several opportunities beyond its primary markets. It had earlier announced plans to accelerate strategy execution, sharpen customer focus and reduce long-term costs. This, in turn, should help the company to position itself as a global leader in the delivery of end-to-end 5G solutions.

At the same time, it is focused on building a strong scalable software business and expanding it to structurally attractive enterprise adjacencies. Nokia also clarified that these 63 contracts exclude any other type of 5G agreements such as paid network trials and pilots. If included, the total number of agreements would then exceed 100.

Further, the company has more than 350 customers in 4G, but these first 63 customers symbolize about two-third of its global Radio Access Networks business in a given year. Reportedly, it is the only vendor with a globally available end-to-end product portfolio that covers all 5G network elements. This includes radio, core, cloud and transport as well as management, automation and security.

Nokia is focused on its strategy that hinges on four priorities. The first priority is to lead in high-performance end-to-end networks with its communication service provider customers. The second priority is based on its relentless pursuit to expand network sales to select vertical markets, specifically energy, transportation, public sector, technical extra-large enterprises and webscale players. Building a strong standalone software business remains the third strategic priority. The fourth pillar aims to create new business and licensing opportunities in the consumer ecosystem.

Shares of Nokia have lost 21.2% against the industry’s growth of 1.8% in the past six months. 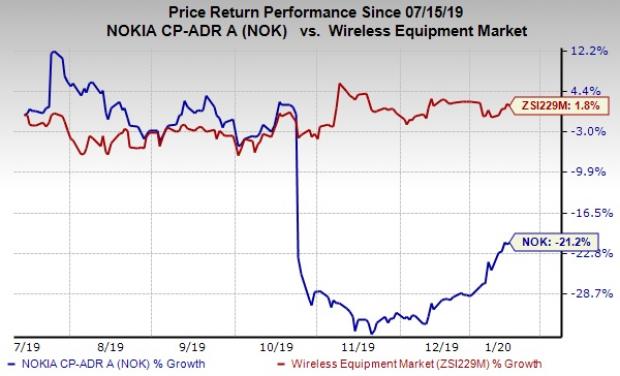 The company topped earnings estimates twice in the trailing four quarters, delivering a positive surprise of 81.6%, on average. It is currently trading with a forward P/E of 14.36X.