Starbucks (SBUX - Free Report) shares have climbed 8% since it reported its Q4 2019 results at the end of October. Despite the climb, which some might have expected to be higher given its strong comparable sales growth, Starbucks stock rests roughly 9% below its 52-week highs.

Starbucks posted 5% global comps growth in the fourth quarter, which topped analysts’ expectations by over 1%. The international coffee giant’s sales growth was driven by the U.S. and China, with same-store sales up 6% and 5%, respectively. SBUX’s strength in its two key markets helped overall sales jump 7%.

Iced coffee and other cold drinks shined during the quarter. Investors should note that cold drinks now account for about half Starbucks’ beverage sales. Going forward, the category is likely to continue to drive sales as younger customers flock to the offerings, which also includes teas, nitro cold-brews, and more.

Starbucks hopes to continue to expand its business in China, which includes partnerships with Alibaba (BABA - Free Report) , as it fights off encroachment from local upstart Luckin Coffee Inc. . In the U.S., the company ramped up delivery through Uber Eats (UBER - Free Report) . The Seattle giant’s digital ordering business has also boomed, especially in cities. Meanwhile, its loyalty rewards program membership grew 15% to 17.6 million active members.

The firm’s e-commerce, delivery, and other digital initiatives will play vital roles for years to come as the industry, from rivals Dunkin' and McDonald's (MCD - Free Report) to fast casual firms like Chipotle (CMG - Free Report) , moves more in that direction. 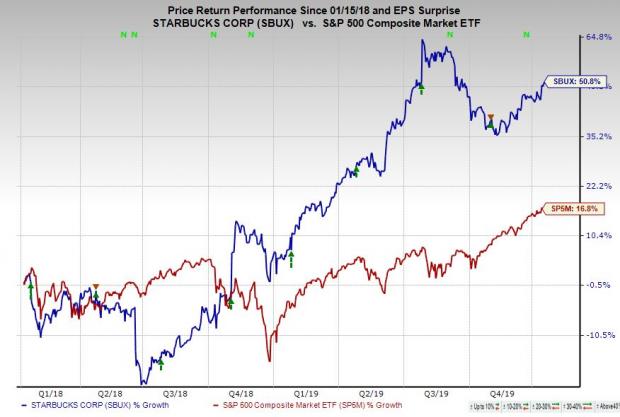 SBUX is trading at 28.7X forward 12-month earnings estimates. This marks a premium compared to its industry’s 24.8X and its own three-year low of 18.6X. But investors have been willing to pay more for Starbucks for nearly all of the last decade and it has traded as high as 32.2X as recently as July 2019.

Meanwhile, the company returned $12 billion to shareholders in fiscal 2019 through buybacks and dividends. The firm also raised its quarterly dividend by 14% to $0.41 per share for 2020 to help its yield rest at 1.82% at the moment, which roughly matches the 10-year U.S. Treasury and Walmart (WMT - Free Report) .

On top of that, our Key Company Metrics call for its comps to pop 3.6%. This would come on top of last year’s 5% same-store sales growth and top 2018 and 2017’s 3% comparable store sales growth.

Starbucks is a Zacks Rank #3 (Hold) at the moment that sports an “A” grade for Growth in our Style Scores system. The company also rests in the top 31% of our more than 250 Zacks industries.

SBUX stock appears to be worth considering right now based on its growth outlook as it expands its modern retail reach. The company has also continued to raise its quarterly dividend, with its current $0.41 payout up 64% from 2017’s $0.25.

Starbucks is tentatively set to release its Q1 fiscal 2020 results on January 28, though our calendar calls for a January 23 release—reported its Q1 2019 results on 1/24.

Delta Beats Big on Earnings: What To Expect From Remaining Airlines