Boeing reported fourth-quarter 2019 commercial deliveries of a mere 79 aircraft compared to 238 airplanes delivered during the fourth quarter of 2018. The dismal figure resulted from lower 737 jet deliveries, which stood at nine compared to 173 delivered in the year-ago quarter.

However, shipments of the 777 and 787 Dreamliners totaled 12 and 45 in the quarter compared with 11 and 39, respectively, in the year-ago period. The company delivered two 747 jets and 11 767 jets compared to one 747 and 14 767 jets sold in the year-ago quarter. Although these jets reflected an improved delivery figure, it was nowhere enough to offset Boeing’s lagged deliveries for the 737 product line.

Boeing dealt with a disappointing 2019 after its once best-selling 737 Max planes had to be grounded in March following two fatal crashes that killed 346 people. As a result, post March, the aircraft giant witnessed massive order cancellations and lower production volumes, ultimately leading to dismal delivery figures. Eventually, in December, the company had to temporarily suspend the production of 737 Max jets.

Due to such setbacks, Boeing’s arch-rival, Airbus, benefited a great deal in acquiring large contracts throughout the year, as customers started to shift to Airbus from Boeing. This is evident from the fact that Airbus had a backlog of a massive 7,482 aircraft toward the end of 2019.

Notably, Boeing could only manage to deliver 380 aircraft in 2019 compared to Airbus, which successfully delivered a record 863 commercial aircraft, 127% more than Boeing and exceeding its 2019 delivery target of 860 planes.

The poor performance of the company’s commercial aircraft segment has also negatively impacted its shares price, which has declined 7.3% in the past six months against the industry’s growth of 2.7%. 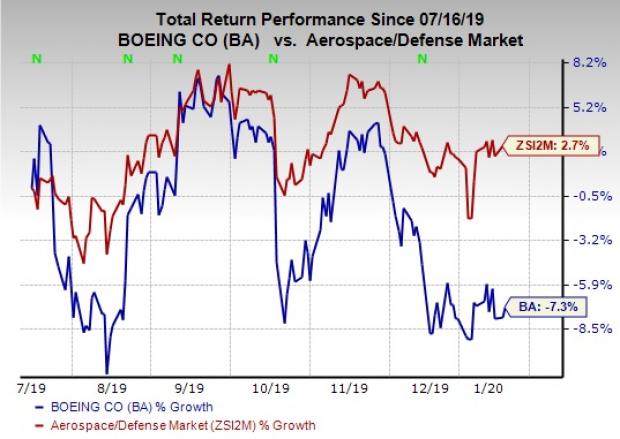 L3Harris’ long-term growth estimate currently stands at 8%. The company delivered a positive earnings surprise of 5.02%, on average, in the last four quarters.

Lockheed Martin delivered a four-quarter earnings beat of 14.41%, on average. It currently has a solid long-term earnings growth rate of 7.1%.