Wall Street bulls are raging since the beginning of this year, breaking one record after another. The S&P 500 Index, generally considered as the barometer of market sentiment within the financial circle, reached a milestone on Jan 16 after closing, above the technical threshold of 3,300 for the first time.

S&P 500 Firing on All Cylinders

Several economists and financial researchers have projected that the S&P 500 index is likely to gain 15-20% in 2020 even though this is the U.S. presidential election year. Historically, the index provided 6.3% annual returns in presidential election years and was up 78% of the time. Meanwhile, trade deals, a stable U.S. economy and a dovish Fed are near-term catalysts for the benchmark index.

The recently signed interim trade deal between the United States and China will be a major relief to the year-long tariff-related conflict. The phase-one trade deal is a major boost to the economies of the two largest trading nations of the world and lowers the likelihood of a global economic slowdown.

Moreover, on Jan 16, the U.S. Senate overwhelmingly voted in favor of the U.S.-Mexico-Canada Agreement (USMCA), sending the pact to President Donald Trump for signature. The newly formed USMCA will replace the previous NAFTA for which Trump has several reservations.

Finally, an accommodative Fed, which reiterated its commitment to do whatever needed to support economic expansion, will be a major catalyst for future growth. The central bank has decided not to raise interest rate until the inflation rate, which is currently at just 1.6%, crosses the Fed’s target level of 2%.

At this stage, it will be prudent to invest in the S&P 500’s strong growth potential. We have narrowed down our search to five S&P 500 stocks. Each of our picks carries a Zacks Rank #1 (Strong Buy). You can see the complete list of today’s Zacks #1 Rank stocks here. 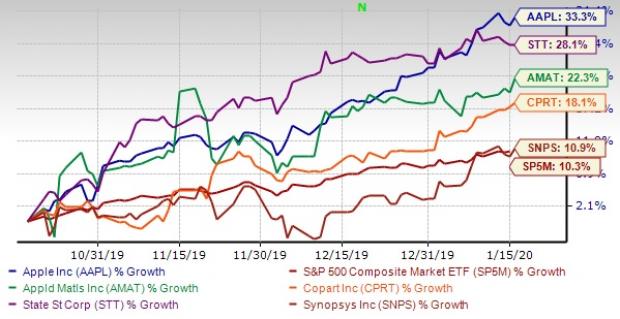 Applied Materials Inc. (AMAT - Free Report) provides manufacturing equipment, services and software to the semiconductor, display and related industries. It operates through three segments: Semiconductor Systems, Applied Global Services, and Display and Adjacent Markets. The company has an expected earnings growth rate of 24% for the current year (ending October 2020). The Zacks Consensus Estimate for the current year has improved 2.4% over the past 60 days.

Synopsys Inc. (SNPS - Free Report) is a vendor of electronic design automation software to the semiconductor and electronics industries. The company has an expected earnings growth rate of 14.5% for the current year (ending October 2020). The Zacks Consensus Estimate for the current year has improved 4.6% over the past 60 days.

Copart Inc. (CPRT - Free Report) provides online auction and a wide range of remarketing services to process and sell salvage and clean title vehicles. The company has an expected earnings growth rate of 23.1% for the current year (ending July 2020). The Zacks Consensus Estimate for the current year has improved 5.7% over the past 60 days.

State Street Corp. (STT - Free Report) provides a range of investment management products and services for institutional investors worldwide through its subsidiaries. The company has an expected earnings growth rate of 15.9% for the current year. The Zacks Consensus Estimate for the current year has improved 7.4% over the past 60 days.

Will J&J (JNJ) Roll Out Pharma Q4 Earnings With a Beat?