Majority of the work related to the deal will be executed in Tewksbury, MA. Raytheon will utilize fiscal 2019 research, development, test and evaluation (Navy) funds for completing the task. The work is expected to get completed by January 2021.

The DBR is the first radar system in the U.S. Navy fleet, capable of simultaneously operating two frequency ranges (S-band and X-band), coordinated by a single resource manager. It combines the functionalities of the X-band AN/SPY-3 Multifunction Radar and the S-band Volume Surveillance Radar (VSR) to detect and track hostile targets. It also provides target illumination and uplink/downlink capabilities for SM-2 and Evolved Sea Sparrow missiles.

In recent times, several developing nations are focusing on the modernization and technical advancement of new generation military radars, led by the rising threat of nuclear ballistic missiles. Such developments are likely to increase the global demand for radars and associated technologies and services. Notably, such demand projections reflect improving prospects of missile manufacturers like Raytheon.

In line with this, the Markets and Markets research firm expects the military radar market to witness significant growth over the 2017-2022 period. This market is projected to see a CAGR of 3.38% to $15.42 billion by 2022, led by the increasing R&D activities on solid-state electronics for the development of military radars with longer detection range.

In the past six months, shares of Raytheon have gained 29.2% compared with the industry’s 16.1% growth. 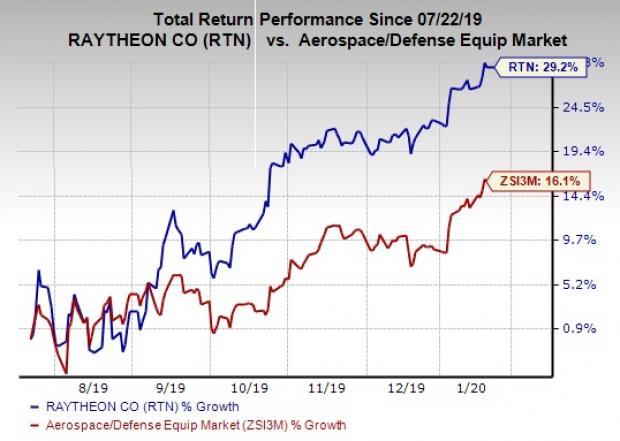 Heico Corporation delivered a four-quarter earnings beat of 12.27%, on average. It currently has a solid long- term earnings growth rate of 11.3%.

Teledyne delivered a four-quarter earnings beat of 10.13%, on average. It currently has a solid long-term earnings growth rate of 7.5%.

L3Harris’ long-term growth estimates currently stand at 8%. The company delivered a positive earnings surprise of 5.02%, on average, in the last four quarters.

Reasons to Bet on Entergy (ETR) Stock for Your Portfolio