Including one-time items, the company’s earnings per share came in at 31 cents compared with the prior-year quarter’s 34 cents.

Total revenues declined 2.1% year over year to $1,048.3 million. However, the top-line figure surpassed the Zacks Consensus Estimate of $1,019 million. This downside resulted from lower volumes in the metal container and closures businesses due to customers pre-buy out activity in the prior-year quarter in the wake of metal inflation in 2019, the pass through of lower raw material costs in the plastic container and closures businesses, and unfavorable foreign-currency translation impact. These negatives were partly offset by the pass through of higher raw material and other manufacturing costs in the metal container business, favorable product mix sold in the closures business and higher volumes in the plastic container business.

Selling, general and administrative expenses flared up 2.7% year over year to $82 million during the fourth quarter. Adjusted operating income was up 3% to $74.7 million from $72.7 million reported in the year-ago quarter. Operating margin was 7.1% in the reported quarter compared with 6.8% witnessed in the prior-year quarter.

Revenues in the Metal Containers segment edged down 0.2%, year over year, to $568.3 million. The segment’s adjusted operating income increased 6.4% year over year to $33 million.

The Closures segment’s revenues declined 4.1% year over year to $332.6 million. Adjusted operating income for the segment was $42.2 million in the final quarter of 2019, down 9.4% from the prior-year quarter.

In the Plastic Containers segment, revenues dropped to $147.4 million from the $154.2 million reported in the prior-year quarter. The segment reported an adjusted operating profit of $12 million, up from the year-ago quarter’s $10.2 million.

The company had cash and cash equivalents of $203.8 million at the end of 2019, significantly up from $72.8 million witnessed at the end of 2018. Cash flow from operating activities were $507.3 million during the 12-month period ended Dec 31, 2019 compared with the $506.5 million recorded in the prior-year comparable period.

Silgan Holdings’ 2019 adjusted earnings were $2.16, up 3.8% from the prior year. Earnings also beat the Zacks Consensus Estimate of $2.15. Including rationalization charges, the company’s earnings per share came in at $1.74, down from the prior-year quarter’s $2.01.

Silgan now expects adjusted earnings per share between $2.28 and $2.38 for the current year. The mid-point of the guidance indicates year-over-year increase of 8% from $2.16 in 2019. Segment income across all businesses is anticipated to benefit from higher pension income, solid unit volumes and continued manufacturing efficiencies. Current-year free cash flow is estimated at $275 million as compared with 2019’s $271.7 million. These estimates do not include any impact from the recently-announced binding offer for Albea's dispensing business.

In 2020, net sales in the metal container business are expected to decrease, year on year. Unit volumes in the business are anticipated to increase as compared with the 2019 levels, owing to customer pre-buy activity, continued growth in pet food volumes, and more normal fruit and vegetable pack in Europe.

Silgan is expanding its footprint-optimization plan in the metal container business to reduce capacity and drive cost reductions. In sync with this, the company is likely to shut down six manufacturing facilities over a three-year period.

For the first quarter of 2020, Silgan now expects adjusted earnings per share in the range of 45 cents to 50 cents compared with the 46 cents recorded in first-quarter 2019. The quarterly results are expected to benefit from higher pension income and continued manufacturing efficiencies across all businesses, higher unit volumes in the metal container and closures businesses and lower interest costs.

Over the past year, Silgan Holdings’ stock has gained 15.3% compared with the industry’s growth of 41.1%. 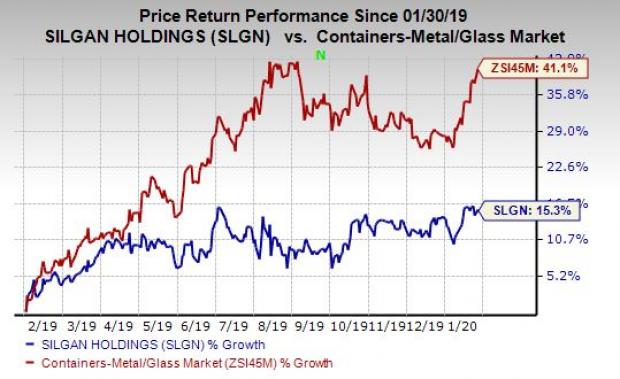