W.W. Grainger, Inc. GWW reported fourth-quarter 2019 adjusted earnings per share (EPS) of $3.88, down 2% year over year primarily owing to a higher tax rate in the reported quarter. The bottom line also missed the Zacks Consensus Estimate of $4.03, resulting in a negative surprise of 4%.

Including one-time items, such as restructuring and other charges, earnings came in at $1.88 in the reported quarter. The figure plunged 49% from the year-ago quarter’s $3.68.

Grainger’s revenues jumped 3% to $2,847 million from the prior-year quarter figure of $2,763 million. This upside was driven by an increase of 3.5 percentage point (pp) in volume and unfavorable price impact of 0.5%. The top line surpassed the Zacks Consensus Estimate of $2,845 million.

Grainger’s adjusted operating income in the fourth quarter dipped 1% to $307 million from the $310 million in the prior-year quarter. Adjusted operating margin contracted 40 bps year over year to 10.8% in the quarter.

The company had cash and cash equivalents of $360 million at the end of 2019, down from $538 million at 2018 end. Cash provided by operating activities decreased to $1,042 million in the fourth quarter from the year-ago quarter figure of $1,057 million.

Sales rose 2.4% year over year to around $11.5 billion from the prior-year figure of $11.2 billion. The top line came in line with the Zacks Consensus Estimate. 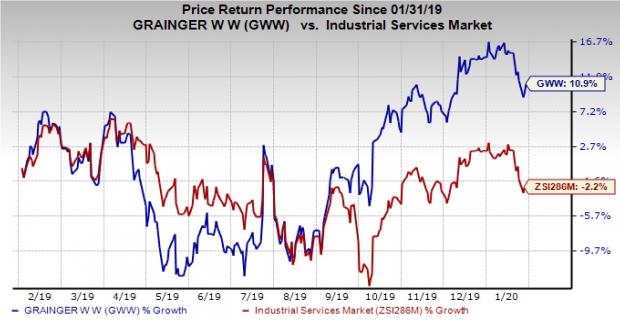 Over the past year, Grainger’s shares have gained 10.9%, against the industry’s decline of 2.2%.

DXP Enterprises has an estimated earnings growth rate of 10.5% for the ongoing year. In a year’s time, the stock has appreciated 10%.

Cintas has an expected earnings growth rate of 15.6% for the current year. The stock has surged 49.5% over the past year.