Exact Sciences EXAS is the biotech firm behind the popular at-home colon cancer screening test, Cologuard. The FDA approved the test in 2014 and EXAS boasts that it “finds 92% of colon cancers and 69% of the highest-risk precancers with 87% specificity.”

Colon cancer was the third leading cause of cancer deaths in 2018, according to the World Health Organization. Luckily, cancer death rates are on the decline and the U.S. rate fell 2.2% in 2017 (most recent figures). This marked the largest single-year drop ever recorded by the American Cancer Society.

The continued expansion of preventative healthcare, such as screenings, is sure to help in the fight against the second-leading cause of death worldwide.

With this in mind, EXAS shares have soared over 415% in the last three years and Cologuard commercials have become more and more common. Despite its industry-crushing run, EXAS stock is down 10% in the last six months, which might set up a solid buying opportunity.

In mid-December, Cowen analyst Doug Schenkel claimed that Exact Sciences was undervalued by 50%. This note came out roughly a month after EXAS completed its acquisition of Genomic Health, which is expected to expand its product pipeline to address other cancers. 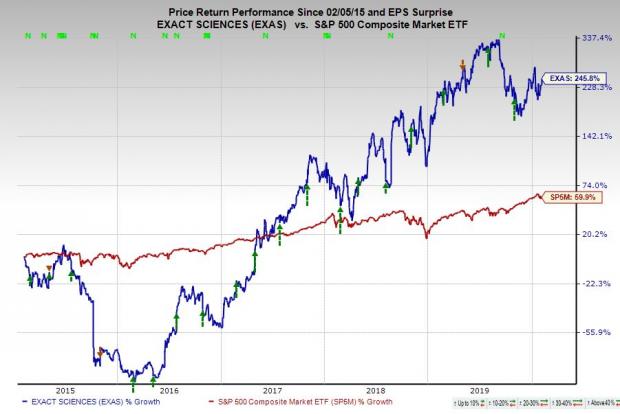 Exact Sciences is set to report its official Q4 and full-year fiscal 2019 financial results on February 11. And it certainly appears that EXAS is a biotech stock that growth-minded investors should think about buying, or at least keep an eye on.