This Latin America's leading flat steel producer has topped the Zacks Consensus Estimate for earnings in three of the trailing-four quarters. The company has trailing four-quarter positive earnings surprise of 11.2%, on average. The company’s fourth-quarter performance is likely to get impacted by reduced shipments and lower steel prices. 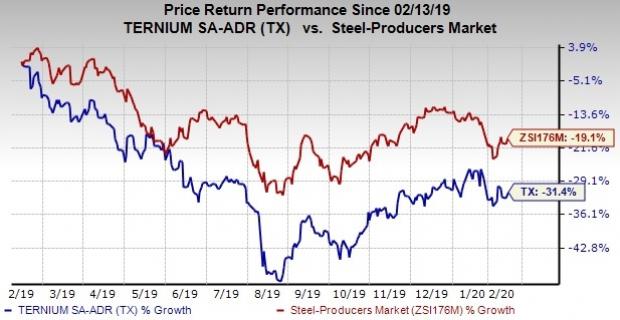 The Zacks Consensus Estimate for Ternium's fourth-quarter consolidated sales is currently pegged at $2,258 million, which suggests a 14.3% decline year over year.

In October 2019, Ternium stated that it expects to witness a decline in fourth-quarter EBITDA compared to third quarter levels. Lower shipments and reduced steel margin are expected to have hurt the company’s fourth-quarter results.

Steel pricing in the United States and Mexico are witnessing a declining trend, with prices sliding to new lows in October last year. The company noted that although steel prices appears to have bottomed out, it has likely witnessed lower realized prices in Mexico in the fourth quarter due to the lag related to contract price resets.

The company’s fourth-quarter shipments in Mexico are anticipated to be lower compared with third-quarter levels due to normal seasonality. Moreover, the domestic construction sector is still soft while the level of industrial customer orders remains relatively flat. Also, shipments in Argentina are expected to have remained low in the fourth quarter due to persistent volatility in steel market demand.

Additionally, a challenging steel pricing environment is likely to have affected fourth-quarter margins. Shipments in the Southern region were relatively stable in the third quarter, per the company. Shipments are expected to have been at low levels as volatility in the Argentina market persists.

Our proven model doesn’t conclusively predict an earnings beat for Ternium this time around. The combination of a positive Earnings ESP and a Zacks Rank #1 (Strong Buy), 2 (Buy) or 3 (Hold) increases the chances of an earnings beat. But that’s not the case here.

Earnings ESP: Earnings ESP for Ternium is 0.00%. The Zacks Consensus Estimate is currently pegged at 32 cents. You can uncover the best stocks to buy or sell before they’re reported with our Earnings ESP Filter.

Valmont Industries, Inc. (VMI - Free Report) , scheduled to release fourth-quarter 2019 earnings on Feb 19, has an Earnings ESP of +2.93% and carries a Zacks Rank #2. You can see the complete list of today’s Zacks #1 Rank stocks here.

Westlake Chemical Corporation (WLK - Free Report) , slated to release fourth-quarter 2019 earnings on Feb 18, has an Earnings ESP of +4.08% and carries a Zacks Rank #3.

ALLETE's (ALE) Q4 Earnings In Line With Estimates, Down Y/Y