Adjusted earnings of 75 cents per share outpaced the consensus mark by 5.6% and improved 13.6% year over year. The reported figure exceeded the company’s guided range of 69-71 cents.

Adjusted revenues (excluding the impact of deferred revenue purchase accounting reductions and other adjustments to revenues for the company’s recently acquired entities) came in at $685.6 million, up 10% year over year on a reported basis, at constant currency and at organic constant currency. The reported figure exceeded the company’s guided range of $667-$672 million.

We observe that shares of TransUnion have gained 55.5% over the past year, outperforming the 38.9% growth of the industry it belongs to. 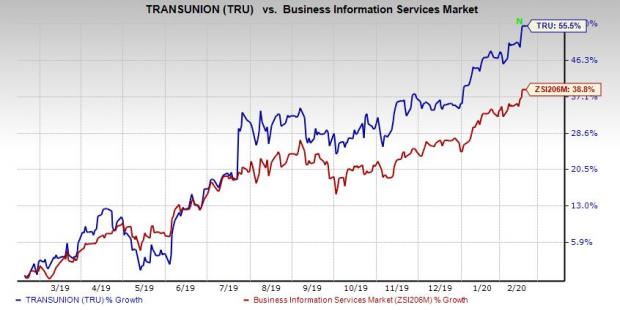 Revenue Growth Across All Segments

Revenues at the Consumer Interactive segment improved 2% from the prior-year quarter figure to $123 million.

For the first quarter of 2020, TransUnion expects adjusted revenues between $681 million and $685 million, suggesting an improvement of 9-10% year over year.

Adjusted EPS is expected between 69 cents and 70 cents, indicating a rise of 15-17% year over year. The Zacks Consensus Estimate for the same is 69 cents.

Investors interested in the broader Zacks Business Services sector are awaiting fourth-quarter 2019 earnings of key players like Stericycle SRCL, ICF International ICFI and ServiceMaster , each slated to release their results on Feb 27.