Westlake Chemical Corporation (WLK - Free Report) saw lower profits in the fourth quarter of 2019, hurt by reduced global sales prices for its major products. The chemical maker posted a profit of $72 million or 56 cents per share for the quarter, down around 41% from $123 million or 95 cents it earned in the year-ago quarter.

Barring one-time items, adjusted earnings per share were 37 cents in the quarter. It fell well short of the Zacks Consensus Estimate of 98 cents.

Lower global sales prices for key products due to trade uncertainties and a slower global economic growth were, in part, masked by reduced purchased ethylene, ethane feedstock and fuel costs.

Revenues were $8,118 million for the full year, down around 6% year over year.

Sales in the Olefins segment fell around 19% year over year to $398 million in the reported quarter. Operating income in the segment tumbled roughly 46% to $49 million. The decline was mainly due to reduced sales prices for major products resulting from higher olefins production and greater impacts from turnaround activity.

Westlake Chemical said that it remains focused on optimizing its operations and lowering its cost position. The company believes that its advantaged position on the global cost curve coupled with a strong balance sheet have positioned it to boost long-term value for shareholders.

The company expects cash interest expense to be roughly $140 million in 2020.  Capital expenditures for the year are projected to be in the band of $650-$700 million.

Shares of Westlake Chemical have lost 21.8% in a year’s time compared with the industry’s 25.2% decline. 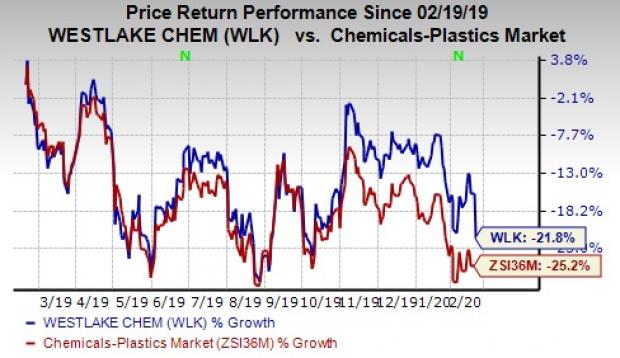 Daqo New Energy has projected earnings growth rate of 353.7% for 2020 and sports a Zacks Rank #1 (Strong Buy). The company’s shares have surged roughly 118% in a year’s time. You can see the complete list of today’s Zacks #1 Rank stocks here.

NovaGold has projected earnings growth rate of 11.1% for the current fiscal and carries a Zacks Rank #1. The company’s shares have surged around 144% over a year.

Sandstorm Gold has estimated earnings growth rate of 66.7% for 2020 and carries a Zacks Rank #1. The company’s shares have shot up roughly 29% in a year’s time.

Agilent (A) Q1 Earnings In Line With Estimates, Revenues Top