Reliance Steel recorded net sales of $2,447.8 million, down around 13% year over year, impacted by lower volumes and pricing. The figure missed the Zacks Consensus Estimate of $2,471.9 million.

The company witnessed continued strong demand for its products and services in aerospace and automotive markets during the fourth quarter. Demand in non-residential construction, the company’s biggest end-market, was also strong in the quarter.

While demand in heavy industry was steady, Reliance Steel saw low demand in the energy market in the fourth quarter. Demand in semiconductor improved during the reported quarter after weakness in the first three quarters of 2019.

Overall sales volume went down around 4% year over year to roughly 1.38 million tons in the reported quarter. Volumes also declined around 7% on a sequential-comparison basis. Shipments fell sequentially due to normal seasonal slowdown resulting from customer holiday-related shutdowns and fewer shipping days.

Average prices per ton sold for the quarter fell roughly 10% year over year to $1,763. Prices also declined around 2% on a sequential-comparison basis.

The company is optimistic about business conditions in the first quarter of 2020. It expects demand to stay relatively healthy in the quarter.

Reliance Steel projects total tons sold to be sequentially up 6%-8% in the first quarter. Overall metals pricing is expected to remain near current levels, which is likely to result in its average selling price per ton sold rising 1%-2% sequentially.

On the basis of these expectations, the company currently projects adjusted earnings in the range of $2.00-$2.10 per share for the first quarter. 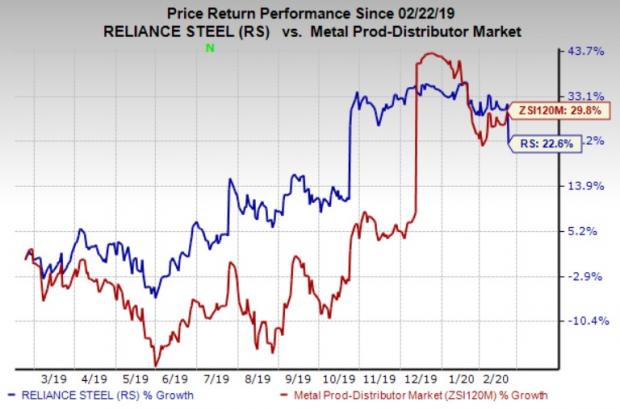 Daqo New Energy has projected earnings growth rate of 353.7% for 2020 and sports a Zacks Rank #1 (Strong Buy). The company’s shares have rallied roughly 92% in a year’s time. You can see the complete list of today’s Zacks #1 Rank stocks here.

NovaGold has projected earnings growth rate of 11.1% for the current fiscal and carries a Zacks Rank #2 (Buy). The company’s shares have surged around 142% over a year.

Commercial Metals has estimated earnings growth rate of 20.7% for the current fiscal and carries a Zacks Rank #2. The company’s shares have shot up roughly 22% in a year’s time.