The quarterly results reflect signs of stabilization in the U.S. farm sector. Farmer sentiment improved on expectations of easing of trade tensions and higher agricultural exports.

Cost of sales in the reported quarter was down 6.5% year over year to $5.1 billion. Gross profit, excluding financial services, for the January-end quarter fell 3.7% year over year, to $1.45 billion. Selling, administrative and general expenses flared up 5.9% year over year to $809 million. Equipment operations reported operating profit of $466 million in the quarter compared with the $577 million witnessed in the prior-year period. Total operating profit (including financial services) dipped to $645 million from $769 million reported in the year-ago quarter.

Net revenues in Deere’s Financial Services division came in at $931 million in the reported quarter, up 9% year on year. The segment’s operating profit came in at $179 million, down 7% year over year.

For fiscal 2020, Deere expects Agriculture and Turf equipment sales to be down 5-10%. Industry sales of agricultural equipment in the United States and Canada are anticipated to be down 5%, due to softer large equipment demand in Canada. Moreover, Construction and Forestry equipment sales are expected to slip 10-15%, due to sluggish construction activity and the company’s efforts to manage inventory levels. Nevertheless, the Financial Services segment is anticipated to benefit from lower losses on lease residual values and income earned on a higher average portfolio.

Shares of Deere have lost 0.1% over the past year compared with the industry’s decline of 1%. 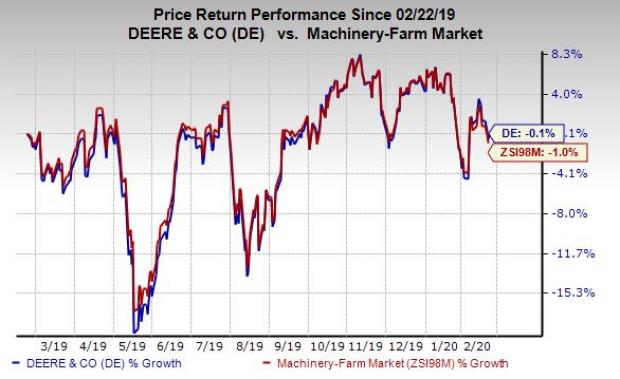 Some better-ranked stocks in the Industrial Products sector are Northwest Pipe Company NWPX, Sharps Compliance Corp SMED and Graco Inc. GGG. All of these stocks sport a Zacks Rank #1 (Strong Buy), at present. You can see the complete list of today's Zacks #1 Rank stocks here.

Northwest Pipe has an expected earnings growth rate of 19.5% for the current year. The stock has appreciated 50% over the past year.

Sharps Compliance has an estimated earnings growth rate of a whopping 767% for the ongoing year. In a year’s time, the company’s shares have gained 43%.

Graco has a projected earnings growth rate of 4.3% for 2020. The company’s shares have rallied 20% over the past year.

These 5 Top Internet Stocks Deserve a Place in Your Portfolio