Sales climbed 24% year over year to $1,112.4 million. However, the reported figure lagged the Zacks Consensus Estimate of $1,168 million.

Selling, general and administrative (SG&A) expenses flared up 38% year over year to $135.4 million. Adjusted operating profit jumped 17% year over year to $87.2 million. Operating margin was 7.8% in the reported quarter compared with the 8.3% recorded in the comparable period last year. Adjusted EBITDA increased 39%, year over year, to $147.4 million in the reported quarter on solid performance in Rigid Industrial Packaging & Services segment, as well as the Caraustar acquisition.

Sales in the Rigid Industrial Packaging & Services declined 5% year over year to roughly $568.7 million. The segment’s adjusted EBITDA increased to $62.5 million from the year-ago quarter’s $48.7 million.

The Paper Packaging segment sales soared 118%, year over year, to $473.7 million in the fiscal first quarter. This upside was driven by the $288.2-million contribution from the Caraustar acquisition. This was partly offset by soft demand and lower published containerboard prices. The company took 21,000 tons of containerboard economic downtime during the quarter. The segment’s adjusted EBITDA moved up to $77.9 million from the $46.5 million reported in the comparable period last year.

Sales in the Flexible Products & Services segment declined 16% year over year to $63 million. The segment reported adjusted EBITDA of $4.1 million compared with the $7.9 million recorded in the year-earlier quarter.

The Land Management segment’s sales came in at $7 million, flat compared with the year-ago quarter. Adjusted EBITDA dropped 9.3% year over year to $2.9 million.

Over the past year, Greif’s shares have lost 8.4% compared with the industry’s decline of 35.7%. 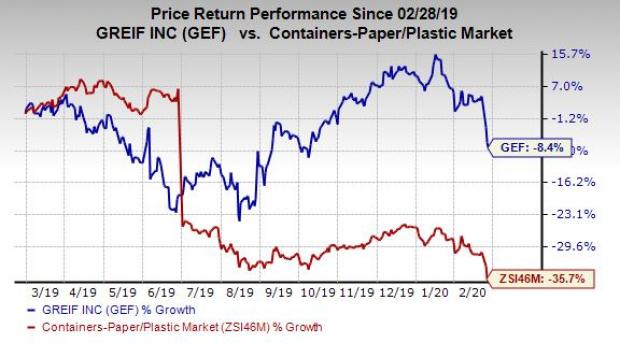 A few better-ranked stocks in the Industrial Products sector include Northwest Pipe Company NWPX, Sharps Compliance Corp SMED and Graco Inc. GGG. All of these stocks sport a Zacks Rank #1 (Strong Buy), at present. You can see the complete list of today's Zacks #1 Rank stocks here.

Northwest Pipe has an expected earnings growth rate of 19.5% for the current year. The stock has appreciated 34% over the past year.

Sharps Compliance has an estimated earnings growth rate of a whopping 767% for the ongoing year. In a year’s time, the company’s shares have gained 39%.

Graco has a projected earnings growth rate of 4.3% for 2020. The company’s shares have rallied 19% over the past year.