ACADIA Pharmaceuticals Inc. ACAD reported fourth-quarter 2019 loss of 34 cents per share, narrower than the Zacks Consensus Estimate of a loss of 37 cents as well as the year-ago loss of 50 cents.

Shares of ACADIA were up 3.8% in after-hours trading on Wednesday following announcement of better-than-expected results. In fact, the stock has rallied 51.8% in the past year against the industry’s decrease of 8.8%. 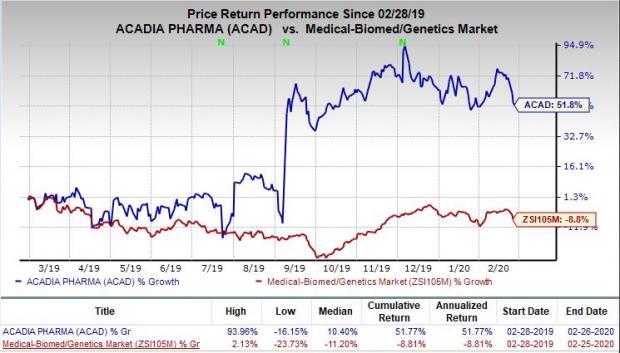 Sales of Nuplazid have grown steadily both year over year and sequentially. The drug has seen a strong uptake ever since its launch in 2016. On fourth-quarter conference call, management stated that the number of patients being treated with Nuplazid continues to grow. Demand for the drug remains strong across both the specialty pharmacy and the specialty distribution channels.

Research and development (R&D) expenses were $57.5 million in the quarter, up 19.3% from the year-ago period due to higher development costs related to the company’s pipeline candidate trofinetide and label expansion studies on Nuplazid.

Selling, general and administrative (SG&A) expenses rose 23.7% year over year to $91.9 million due to increased marketing expense and higher advertising and personnel costs.

Nuplazid is being evaluated in the phase III HARMONY study for treating dementia-related psychosis (DRP). Other studies include the phase II ADVANCE study for addressing schizophrenia’s negative symptoms and the phase III CLARITY study as an adjunctive treatment of major depressive disorder (MDD).

ACADIA is planning to file a supplemental new drug application seeking approval of Nupalzid to treat DRP later in the summer of 2020.

Apart from Nupalzid, ACADIA is evaluating its investigational candidate trofinetide in a late-stage study for the treatment of Rett syndrome, a rare neurodevelopmental congenital CNS disorder for girls aged between five and 20 years. In October 2019, the company initiated the phase III LAVENDER study on trofinetide for addressing the same indication. Top-line results from the same are expected next year.

Regeneron’s earnings estimates have been revised 5.8% upward for 2020 over the past 60 days. The stock has gained 6.3% in the past year.