How Coronavirus Can Shake the Thriving U.S. Housing Sector

U.S. stocks witnessed a broad-based rebound on Monday after the coronavirus panic resulted in a severe seven-session losing streak. However, investors are probably not completely free of the virus fear. Only last week, three major indices went into a tailspin and dragged safe-haven bond yields down to record lows amid mounting global panic over the economic impact of the virus. According to S&P Dow Jones Indices, the sell-off has wiped out nearly $7 trillion in market value and Monday’s jump has only reversed a nominal part of the losses.

As the virus has now tightened its grip on 55 countries, with no signs of abating any time soon, a clear picture of the global economic impact has begun to emerge. No industry, including U.S. construction, is immune to it. The U.S. housing industry, which has so far been grappling with shortage of skilled labor, higher land costs and tariff-related woes, is expected to witness another phase of the coronavirus outbreak-induced instability.

COVID-19 May Not Spare US Construction

As China’s manufacturing output is expected to decline with factories temporarily sidelined, U.S. building product supply chains will likely get affected. This can potentially raise costs for builders. According to Richard Branch, chief economist at Dodge Data & Analytics, nearly 30% of products used in U.S. building construction are imports from China. This makes China the largest single supplier to the United States. Meanwhile, Canada and Mexico supply about 20% each.

Hence, upon failure of quick containment of the virus, the supplies may continue to tighten causing a rise in building costs. This will probably delay or cancel projects. To this end, it is important to note that luxury homebuilder Toll Brothers Inc. (TOL - Free Report) highlighted during its fiscal first-quarter earnings call that the outbreak in China led to shortages of lighting fixtures and small appliances, prompting it to delay the sale of 11 homes in California, which is one of the company’s biggest markets.

Now, the extent of the impact is subject to the capability of U.S. builders to substitute products from China with supplies from domestic or other international vendors. Notably, Asian countries, like Japan, South Korea and Vietnam, which also export building products to the United States, hugely depend on China for raw materials.

The coronavirus outbreak will mostly hurt those U.S. real estate companies which depend on material supply from China. As the outbreak has taken the shape of a global crisis, material supply chain disruptions could also impact construction sites and development pipelines.

Dodge Data & Analytics currently expects a modest decline in construction starts this year. Among many other headwinds that the U.S. economy is currently facing, the virus outbreak will likely lead to economic slowdown and push starts lower.

As panic-driven investors flock to safe havens like Treasuries that pushed the 10-year Treasury note to a record-low yield, mortgage rates have been driven down to near all-time lows. Now, this dramatic drop in rates may drive demand for homes or may lower monthly payments for homeowners who refinance. 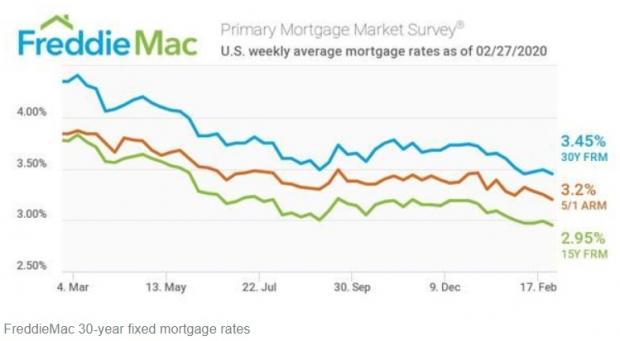 Low interest rates have already been pushing home sales higher. Existing home sales rose 9.6% in January to a seasonally adjusted 5.46 million from a year ago, the NAR said. This marked the second straight month of year-over-year growth. Meanwhile, sales of newly constructed single-family homes marked a 13-year high in January.

Overall, the outbreak has caused a mixed situation for the U.S. housing market. On one hand, this current low-rate environment may boost home-buying activity, which will drive the housing industry. However, this will eventually build pressure on the historically-low inventory level.

On the other hand, any disruption in the supply chain arising from the outbreak may impact builders’ ability to deliver the much-needed new inventory into the U.S. housing market that includes biggies like Lennar (LEN - Free Report) , D.R. Horton (DHI - Free Report) , PulteGroup (PHM - Free Report) and KB Home (KBH - Free Report) .