The Reasons Behind The Coronavirus Crash

The coronavirus has caused widespread panic in the markets with all the major indexes are over 13% off their highs.

It’s been 3 months since the first case in Wuhan, and the virus has affected over 100,000 people and spread to 96 countries & territories. World Health Organization (WHO) announced on March 3rd that the mortality rate of this pathogen is 3.4%.

China had implemented draconian measures to control the virus, shutting down affected cities. These shutdowns in China has caused a global supply shock. This country is responsible for 20% of the world’s manufacturing. The rapid spread of the disease outside of China now has the markets concerned about global demand.

Before this market drop, the market’s valuations were quite stretched, coming out of the 2019 bull market. The rich stock valuations added to the velocity of the market break down.

This is an earning recession, not a balance sheet recession meaning that the issues are only short-term. Analysts are expecting a rapid V-shaped recovery once a bottom is hit. 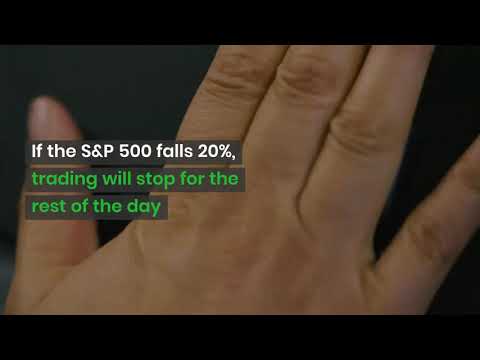 Why Was a "Circuit Breaker" Triggered on Monday?