Mallinckrodt Up on New York's Support for Opioid Settlement

The motion to remove Mallinckrodt LLC and SpecGx LLC from the New York State trial related to opioid-abuse is currently pending before the Supreme Court of New York. However, the trial has been postponed indefinitely due to the coronavirus scare.

Mallinckrodt’s stock has slumped 86% in the past year compared with the industry’s decline of 10.7%. 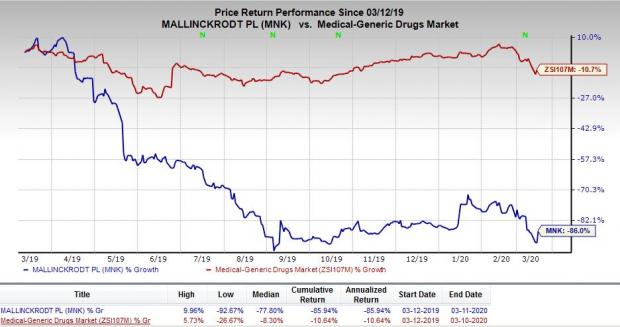 Last month, Mallinckrodt and its specialty generics-focused subsidiaries Mallinckrodt LLC, SpecGx LLC, and certain other affiliates proposed an agreement in principle on the terms of a global settlement that would resolve all opioid-related claims against the company, Specialty Generics, and other subsidiaries.

The agreement in principle has been reached with a court-appointed plaintiff executive committee, representing the interests of thousands of plaintiffs in the opioid multidistrict litigation. Mallinckrodt expects that Specialty Generics, which manufactures certain generic opioid products, among other products, will file voluntary petitions under Chapter 11 of the U.S. Bankruptcy Code in the coming months. The settlement terms include structured payments of $1.3 billion over eight years and warrants for 19.99% of the company's outstanding shares. Additional $300 million will be paid to the plaintiffs upon Specialty Generics’ emergence from bankruptcy.

We note that Mallinckrodt has entered into a number of settlement agreements related to opioid abuse in 2019. A global settlement of the opioid litigation will remove a major overhang on the stock.

Apart from Mallinckrodt, many pharma companies like J&J (JNJ - Free Report) Endo International (ENDP - Free Report) and Teva Pharma (TEVA - Free Report) are embroiled in multiple opioid litigations filed by several states, counties and political subdivisions in the United States regarding the abuse of opioid-based drugs. The industry players have been accused of faulty marketing practices, which downplayed addiction risks from these drugs and spurred their consumption instead.

Per the National Institute of Drug Abuse, opioid overdose claimed lives of 47,000 Americans in 2017. Moreover, prescription opioid misuse alone creates a total economic burden of $78.5 billion every year. In the past two decades, 400,000 deaths occurred due to opioid-based drug abuse, per the estimate of Centers for Disease Control and Prevention.