Xandr Invest is a strategic buying platform of TV ads that provides unique customer insights, thereby empowering advertisers to attract users in the most engaging way. Designed to meet the requirements of today’s advertising, the platform supports automated TV ad buying with streamlined digital advertising strategies across digital video, Connected TV and OTT platforms. With superior usability and premium inventory access, advertisers will be able to define a single audience by leveraging either the viewership data from Xandr or Nielsen Audience Segments or their own first-party data.

After gathering viewership data, advertisers can place a single order through Xandr Invest that will help them to plan for and buy commercial time across partner networks to connect with viewers. Among the partner networks, AT&T is more focused on collaborating with AMC Networks as the innovative tool will help the marquee media brand to put a cap on its ad prices and emerge as the biggest contributor to its bottom line. Moreover, the tech behemoth also stated that marketers will be able to purchase ad inventory from TV networks such as CNN, TNT and TBS, which are part of AT&T’s WarnerMedia division.

Per media reports, the wireless service provider claimed that the service currently caters to 76% of the household in the United States, which has a prospect of reaching 208.2 million total viewers each month. The trailblazing platform will be available through an open beta system in May 2020, which is considered as crucial period of annual advertising sales. The alliance underscores AT&T’s efforts to be at par with online media honchos — Facebook (FB - Free Report) and Google — in the era of interactive TV advertising.

The company is focused on streaming services with AT&T TV and the soon-to-be-launched HBO Max. This is likely to create other avenues to monetize content while increasing ARPU (average revenue per user) through higher customer adoption. 5G technology, being the topmost priority, AT&T is poised to continue its momentum as it brings the tally to 80 cities across the nation to date. Its 5G service entails the utilization of millimeter wave spectrum for deployment in dense pockets, while it intends to deploy 5G on mid- and low-band spectrum holdings in suburban and rural areas. Its LTE network covers more than 400 million people in North America. Sustainable subscriber growth, backed by network expansion, remains a key driver. All these initiatives augur well for top-line growth of the company.

Driven by strong execution of operational strategies, the stock has gained 14% compared with the industry’s growth of 5.9% in the past year. The company topped earnings estimates thrice in the trailing four quarters and matched the same in the remaining quarter, delivering a positive surprise of 0.9%, on average. 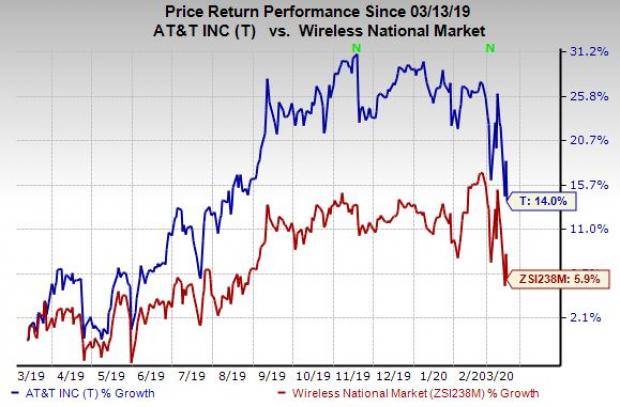