Wheaton Precious Metals Corp. (WPM - Free Report) reported adjusted earnings of 17 cents per share in fourth-quarter 2019, which were in line with the Zacks Consensus Estimate. The bottom line surged 112.5% year over year.

The company generated revenues of $223.2 million in the reported quarter, up 13.5% on a year-over-year basis. The top line, however, missed the Zacks Consensus Estimate of $234 million. The upside was driven by increased average realized prices of gold, silver and palladium and a higher number of silver ounces sold, partly offset by a decrease in the number of gold ounces sold.

The company had $104 million of cash in hand in 2019, up from $76 million at the end of 2018. It recorded operating cash flow of $502 million in 2019 compared with $477 million in 2018. The company had outstanding liability of $875 million under the company's $2 billion revolving credit facility. During the fourth quarter, Wheaton repaid $139 million under the revolving facility.

For the current year, Wheaton’s board of directors hiked the quarterly dividend by 11% year over year to 10 cents per share. The dividend will be paid on Apr 9 to shareholders of record as of the close of business on Mar 26, 2020.

Wheaton reported adjusted earnings per share of 56 cents in 2019, up 16.7% from the prior year’s 48 cents. The reported figure came in line with the Zacks Consensus Estimate.

Shares of the company have gained 23.3% over the past year against the industry’s decline of 29.3%. 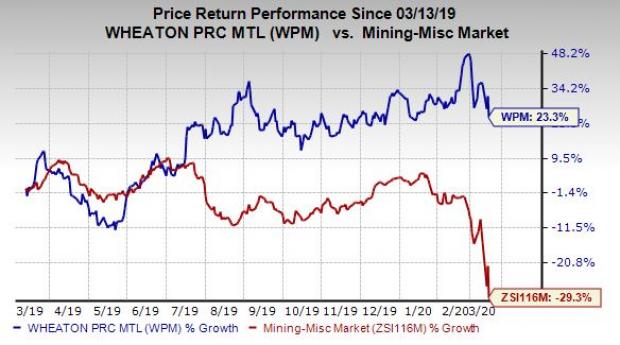 Daqo New Energy has an expected long-term earnings growth rate of 29%. The company’s shares have surged 73.2% in the past year.

Sibanye has an expected long-term earnings growth rate of 20.4%. Its shares have soared 109.5% in a year’s time.

Impala Platinum has a projected long-term earnings growth rate of 26.5%. The company’s shares have appreciated 125.3% over the past year.