IDEX Corporation (IEX - Free Report) recently announced that its board has approved an additional share repurchase program, authorizing it to buy back up to $500 million of its shares.

Under this program, the company is likely to make share repurchases from time to time through several means that include open market transactions and privately negotiated transactions. The timing and amount of share repurchases will depend on certain factors such as market conditions and relevant securities laws.

Strong cash flows allow IDEX to effectively deploy capital for repurchasing shares, paying out dividend as well as making acquisitions. Notably, the company’s free cash flow recorded an increase of 12.7% to $477.2 million in 2019, on a year-over-year basis. In 2019, the company repurchased shares worth $54.7 million and distributed dividends totaling $147.2 million. The quarterly dividend rate currently stands at 50 cents per share (a hike of 16% was announced in May 2019). As a matter of fact, this share repurchase program is likely to instill confidence among investors.

IDEX expects industrial markets to remain challenging in the first half of 2020, on account of weak global demand for industrial products. Notably, it expects organic sales for the year to be down 2% to flat. In the first quarter of 2020, the company anticipates organic sales to decline in the range of 4-5%.

Also, the company’s international operations have exposed it to the adverse impacts of macroeconomic cycles in the United States and international markets. Also, it faces risk from unfavorable movements in foreign currencies. For instance, in the fourth quarter of 2019, forex woes had an adverse 1% impact on its sales. 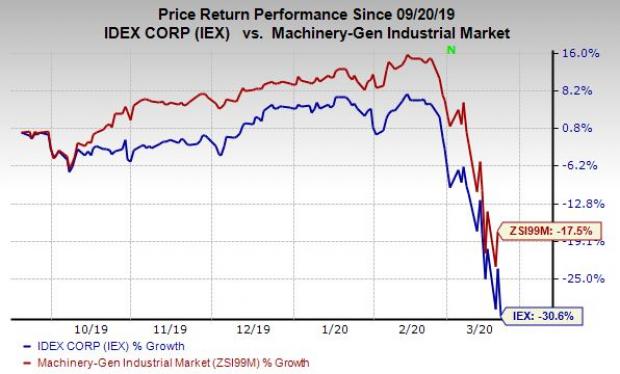 In the past six months, the Zacks Rank #4 (Sell) company's shares have dipped 30.6%, wider than the industry’s decline of 17.5%. Also, analysts have become increasingly bearish about the company in the past seven days. Consequently, the Zacks Consensus Estimate for its 2020 earnings has trended downward from $5.74 to $5.65 on two downward estimate revisions versus none upward. Over the same time frame, the consensus estimate for 2021 earnings has been revised downward from $6.14 to $6.07.

Tennant delivered positive earnings surprise of 26.60%, on average, in the trailing four quarters.