Including one-time items, the company reported net income of 53 cents per share in the fiscal second quarter compared with the prior-year quarter’s 13 cents.

Net sales for the reported quarter declined 4.4% year over year to $1.34 billion. However, the reported figure missed the Zacks Consensus Estimate of $1.39 billion.

Cost of goods sold in the quarter was down 10.3% year over year to $1.12 billion. Gross profit climbed 44.4% year over year to $218 million during this period. Core EBITDA was $145.3 million in the fiscal second quarter, highlighting 60% growth from the year-ago period’s $91 million.

The Americas Recycling segment reported net sales of $248 million in the fiscal second quarter compared with the $287 million recorded in the prior-year quarter. Adjusted EBITDA came in at $5,754 million, down 43.3% from the year-ago quarter.

The Americas Fabrication segment reported net sales of $512 million, down 3.6% from the prior-year quarter’s $531 million. The segment reported adjusted EBITDA of $16 million, as against the EBITDA loss of $49.6 million posted in the year-ago quarter.

Commercial Metals exited the fiscal second quarter with cash and cash equivalents of $232.4 million compared with $192.5 million recorded at the end of fiscal 2019. The company’s long-term debt reduced to $1,145 million at the end of the quarter from the $1,227 million recorded as of the end of fiscal 2019. Cash flow from operating activities were $253.4 million during the six months ended Feb 29, 2020 compared with cash usage of $352.9 million in the comparable prior year period.

On Mar 18, the company’s board announced a quarterly dividend of 12 cents per share. This dividend will be paid on Apr 20, to shareholders of record on Apr 6, 2020.

The company is poised to gain from solid construction, good fabrication backlog, solid bidding activity and upbeat metal margins for the current year. However, the company has not provided any guidance due to economic uncertainties on account of the coronavirus outbreak. The company is also considering potential actions that local, state and federal governments might take in response to the outbreak.

Commercial Metals’ shares have declined 28.1% over the past year, compared to the  industry’s decline of 57.3%. 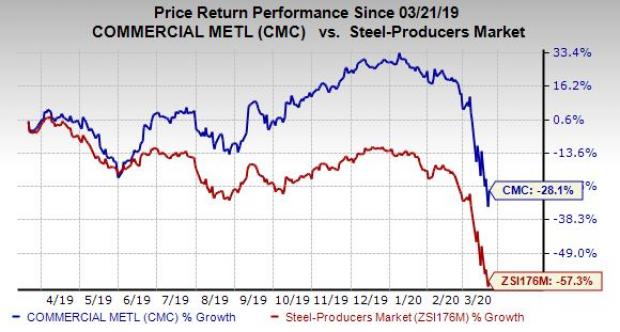 Newmont has an anticipated earnings growth rate of 72% for the current year. The company’s shares have gained 22.7% in the past year.

Novagold has an estimated earnings growth rate of 11.1% for fiscal 2020. The company’s shares have surged 86.4% over the past year.