Valued at $601.3 million, the contract was awarded by the Strategic Systems Programs, Washington DC. Majority of the task will be completed in Magna, UT and Sunnyvale, CA. The contract will cater to the U.S. Navy and government of the United Kingdom.

Trident II (D5) is the latest generation of submarine-launched fleet ballistic missiles (SLBMs), equipped with multiple independently targetable re-entry vehicles (MIRV) and thermonuclear warheads. Since its design completion in 1989, Trident II has made 167 successful test launches — a record unmatched by any other large ballistic missile or space launch vehicle.

Of late, increasing geopolitical conflicts, war, and terrorism across the globe have forced developing nations, the United States and other developed countries to significantly boost their missile strength. As a result, the United States — the largest provider of missile defense systems — is witnessing increased number of contracts from its government as well as allies for supplying combat proven missiles.

SLBM is an integral part of the United States’ strategic nuclear deterrent Triad, while Trident II D5 is one of the major SLBM programs in the nation. This surely positions Lockheed Martin, which is Trident’s primary contractor, in a comparatively advantageous spot when it comes to the U.S. Navy’s preferred missile programs. These factors might have helped Lockheed Martin to win the latest contract.

The global rocket and missile market, which also includes fleet ballistic missiles, is projected to witness CAGR of 4.74% during the 2017-2022 period to reach a value of $70 billion by 2022 (as per a report by Markets and Markets research firm). Such projects reflect increased growth opportunities for missile-makers like Lockheed Martin in the aforementioned market, moving ahead.

In a year’s time, shares of Lockheed Martin have gained 6.2% against the industry’s 37% decline. 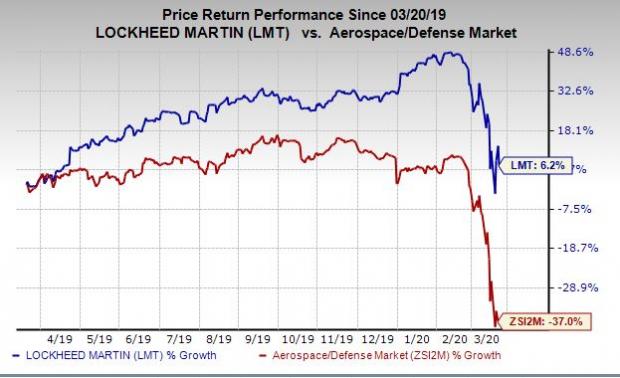 Leidos’ earnings estimate for 2020 indicates an annual improvement of 8.7%. The company surpassed the Zacks Consensus Estimate for earnings in the last four quarters, the average beat being 11.19%.

Northrop’s earnings estimate for fiscal 2020 indicates an annual improvement of 9.4%. The company surpassed the Zacks Consensus Estimate for earnings in the last four quarters, the average beat being 13.12%.

L3Harris’ earnings estimate for 2020 indicates an annual improvement of 15.2%. The company surpassed the Zacks Consensus Estimate for earnings in the last four quarters, the average beat being 5.28%.