The Boeing Company BA recently secured a $1.56-billion modification contract for the production of 18 P-8A Poseidon maritime aircraft. Among these 18 aircraft, eight would be manufactured for the U.S. Navy, six for the Republic of Korea and four for the Royal New Zealand Air Force.

The contract has been awarded by the Naval Air Systems Command, Patuxent River, MD. The Royal New Zealand Air Force is expected to begin receiving aircraft in 2022, while the Republic of Korea Navy will start receiving in 2023. Majority of the work related to this deal will be executed in Seattle, WA, along with other locations across the United States.

The P-8A Poseidon and P-8I variants are militarized with maritime weapons, which patrol the globe performing anti-submarine and anti-surface warfare; intelligence, surveillance and reconnaissance; and search and rescue missions. Seven nations across the globe have now selected the P-8A as their future maritime patrol aircraft, including South Korea and New Zealand. Earlier this February, Britain’s Royal Air Force (RAF) also received its first P-8A aircraft, which will be instrumental in monitoring Russian submarine activities.

Among all the varied defense equipment that Boeing manufactures, the company’s key forte lies in the development of combat-proven aircraft, such as the P-8A Poseidon. Additionally, Boeing has started developing military aerial refueling and strategic transport aircraft for its fixed-wing military aircraft programs. Such notable developments are anticipated to fuel this aerospace giant’s growth, considering the increasing defense spending provisions made by the current U.S. administration.

Further, the U.S. fiscal 2020 defense budget allocation includes massive war-fighting investments worth $57.7 billion for military aircraft. Such defense spendings highlight the BDS segment’s solid prospects, which in turn, are likely to boost the company’s profit margins in the days to come.

In a year’s time, shares of this Zacks Rank #3 (Hold) company has slumped 61.1% compared with the industry’s 30.6% decline. You can see the complete list of today’s Zacks #1 Rank (Strong Buy) stocks here. 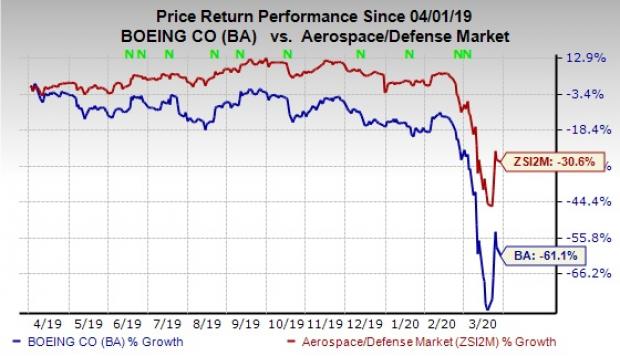 Bet on These Top 5 Stocks With Stellar Net Profit Margins