The top line was driven by solid performance of Core, Payments, Complementary, and Corporate and Other segments during the reported quarter. Additionally, accelerating processing, and services and support revenues contributed to the results.

Further, Jack Henry has returned 16.8% in the year-to-date period, outperforming the industry’s rally of 8.3%. 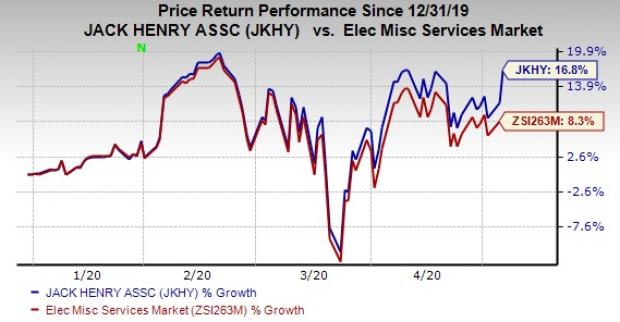 Services & Support: The company generated $270.2 million revenues in this category (63% of revenues). Notably, the figure improved 15% from the year-ago quarter, courtesy of increase in data processing and hosting fees. Moreover, hike in implementation fees of the company’s private cloud offerings and accelerating software usage revenues contributed to the upside.

Processing: Revenues worth $159.2 million came from this category (37% of revenues) during the reported quarter, up 9% year over year. This can be attributed to hike in remittance fees and growth in card processing transaction volumes.

Core: The company generated $146.4 million revenues from this segment (34% of total revenues), improved 12% year over year.

Corporate & Other: The company generated $13.9 million revenues from this segment (3% of total revenues), up 13.9% from the prior-year quarter.

In third-quarter fiscal 2020, total operating expenses were $337.5 million, reflecting an improvement of 11% year over year. This can primarily be attributed to rising headcounts, which led to an increase in personnel costs and salaries, and rising costs related to the company’s card processing platform.

Research and Development expenses expanded 100 bps year over year to 7% as a percentage of revenues.

Trade receivables were nearly $212.1 million, up from $204.7 million in the previous quarter.

Further, current and long-term debt stood at $55.2 million at the end of the fiscal third quarter.

For fourth-quarter fiscal 2020, Jack Henry expects revenues between $408 million and $415 million. The Zacks Consensus Estimate for the same is projected at $419.87 million.

For fiscal year 2020, the company projects revenues between $1.695 billion and $1.702 billion. The Zacks Consensus Estimate for the same is projected at $1.69 billion.

The company anticipates coronavirus pandemic to impact sales bookings and revenues in the near term.

Nevertheless, its growing initiatives to combat the disruptions caused by this novel virus remain noteworthy.

Long-term earnings growth rate for both Netlist and InterDigital is pegged at 15%, while the same for Pixelworks is 20%.